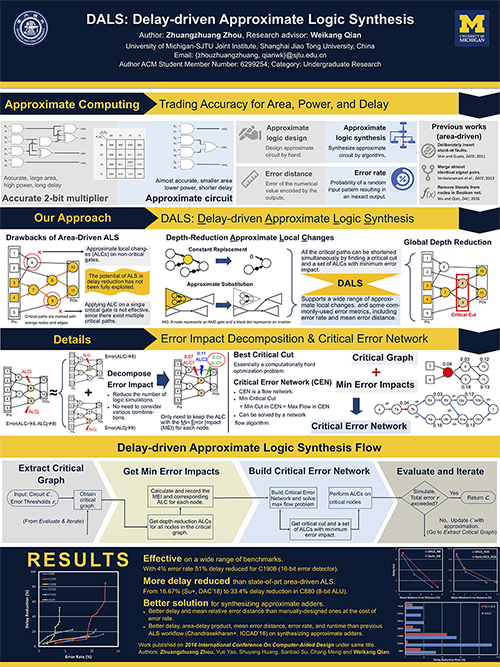 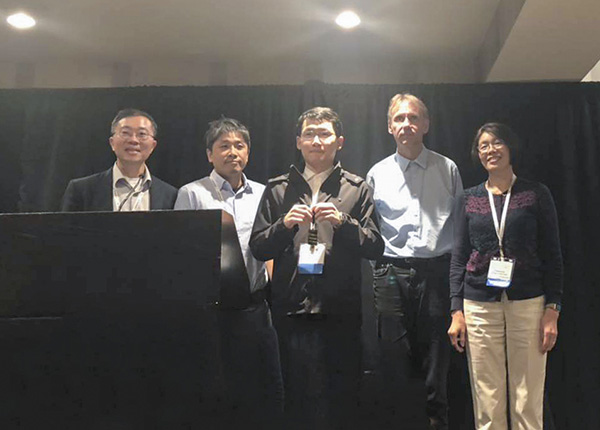 The ACM Student Research Competition, sponsored by the US-based multi-national scientific giant Microsoft, provides a unique platform for both undergraduate and graduate students to present their original researches at well-known academic conferences in various fields. First-place takers of the ACM SRCs of different special interest groups held during top-level international seminars over the past year automatically advance to the Grand Finals. Zhuangzhuang Zhou was the first-place winner in undergraduate category at the IEEE/ACM International Conference on Computer-Aided Design (ICCAD) 2018 SRC. He and the other SRC winners from top universities worldwide who successfully advanced to the Grand Finals were evaluated by a panel of judges. Final panel evaluation report puts Zhuangzhuang Zhou’s research proposal as “very well written” and “thoroughly explaining  the effectiveness of DALS framework in reducing approximate circuits’ delay.” “The research work is well explained and motivated, while the logic is explained using pseudocode and is compared against state-of-the-art techniques,” stated the report. 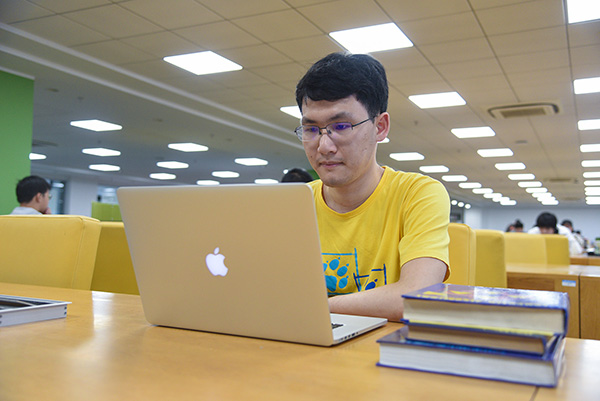 Zhuangzhuang Zhou is a JI  undergraduate student majoring in Electrical and Computer Engineering. When he worked as the teaching assistant for VE281 Data Structures and Algorithms, he joined Professor Weikang Qian’s research group and conducted academic research in the field of design automation and approximate computing. He worked with other group members on algorithms that could generate approximate designs with significantly-reduced delays for arbitrary circuits and error constraints. Relevant research finding was published at ICCAD,  a top conference in the field of design automation, boasting  a paper acceptance rate of 24.7%.

“ Professor Weikang Qian, who guides me to the field of scientic research, and other members of the research group have truly helped  me a lot throughout the process. The experience of conducting research and attending conference has greatly broadened my horizon in my major, and helped me make up my mind for my future career. After graduating from the Joint Institute, I would go to the Computer Systems Laboratory at Cornell University to pursue a Ph.D. degree in Electrical and Computer Engineering,” said Zhou.

His advisor Professor Qian said: “This is a great achievement. He passed several rounds of competitions, including online application, poster presentation, and final oral presentation, and finally got the first place. He has published a first-authored paper at ICCAD (acceptance rate 24.7%), a prestigious conference in the area of electronic design automation. Obviously, his training at JI is an important factor to his success. He has top research ability among undergraduate students. Also, his presentation skills in English, both written and oral, are very strong.”

The ACM grand finalists and their advisors including Zhou and Professor Qian  are expected to attend  the Annual ACM Awards Banquet on Saturday, June 15, 2019 at the Palace Hotel in San Francisco, where they will be recognized for their accomplishments, along with other ACM award winners, including the winner of the prestigious Turing Award.