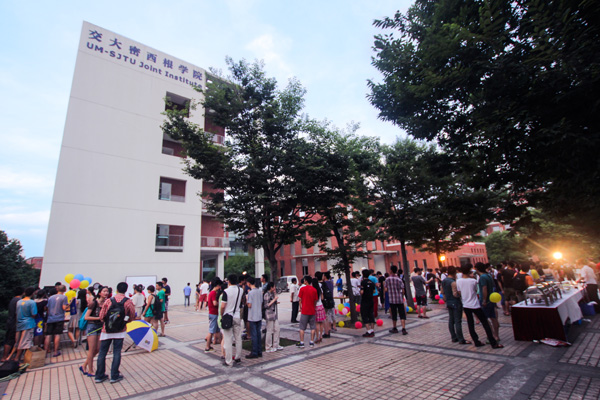 Festive Scene of the Party

To bring the American culture to the SJTU campus and to celebrate the Independence Day of the United States of America, the Joint Institute hosted the first “American Culture Night” on July 4, 2013. The festive activity attracted 150 students from across the SJTU campus beyond the JI community.

The lively festivities kicked off with high-spirited American songs and dances performed by JI students, followed by exciting presentations, performances, face painting, games, food, and fireworks as culmination of the night.

Dr. Shane Johnson, a versatile American JI lecturer, gave a humorous insight on “Cultural Differences between the US and China,” Alex and Jonathan, two summer-program students from the University of Michigan, presented American history and sports in an interesting way. Matt, another UM student, hosted a fun game called “Name the State” to introduce the 50 American states to the Chinese audience. From the rich program and creative activities, attendees were impressed by the U.S. characteristics and spirit that make the country unique. They had the opportunity to play Frisbee, darts, as well as toss around a football, which are all typical of U.S. summer party activities.

Many visitors were drawn to the face painting booth where they could choose from a variety of symbols and pictures. An American student DJ created a crowd-pleasing music playlist which tempted everyone to sing and dance throughout the night. Mouth-watering American barbeque provided the crowd with a bite of the US. Participants had fun lighting sparklers to celebrate the evening, and a spectacular firework brought the evening fanfare to its grand finale. 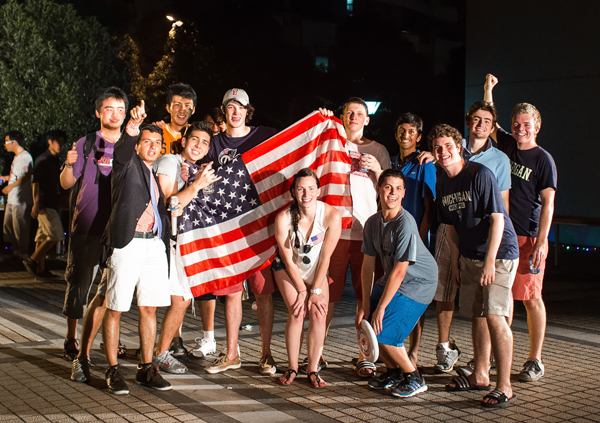 As a testing stone for Sino-US educational collaboration, JI opened a window for the SJTU community to the United States of America through the “American Culture Night.” The event was a huge success and is sure to be an unforgettable experience for both the Chinese and the Americans.