Dr. Chen and her collaborator discovered that the proton conductivity in ceramic fuel cells follows far more complex laws than previously known. This could also solve the puzzle of why the proton-conducting fuel cells have not been able to deliver the powerful performance as expected.

In electrochemical energy conversion and storage devices such as fuel cells and batteries, the electrons and ions play the leading role as charge carriers. For example, in fuel cells, the dominant ions are the protons derived from hydrogen. To enhance the performance of the fuel cells, it is crucial to understand the conductivity mechanism of the charge carriers.

The ceramics conduct protons better at higher temperatures. This characteristic is shared with many electron-conducting metal oxides called polaron conductors. When an electron is trapped in a crystal lattice and only moves if the lattice vibrates thermally, a polaron, or more specifically, an electron-polaron is formed.

It has been assumed that, like a polaron, a proton in a crystal lattice could be trapped and carried along by the heat of lattice vibration. Now Dr. Chen and her collaborator have provided experimental evidence for this hypothesis. They measured the jump frequency of protons and the lattice parameters of ceramic proton conductors in a wide range of temperatures. Their data of neutron and synchrotron radiation are in consistence with the classical polaron theory. In addition, they could identify exactly which atoms drive the proton in the crystal lattice vibration and thereby can transport electrical charge.

Sketch of a proton polaron surrounded by lattice ions

This novel proton transport mechanism may help to build better ceramic proton conducting electrolytes in the future, which opens up a new development of more efficient fuel cells, electrolyzers and other electrochemical devices. Fuel cells can produce cleaner electricity more efficiently than using conventional methods. The ceramic fuel cells are a robust and flexible choice of fuels which could be produced by either hydrogen or natural gas energy. Also, it does not require noble metals as catalysts. However, it requires operation temperatures as high as 600-1000 degrees with long start-up time, which leads to durability issues and the need for expensive component materials. With the development of ceramic proton conductors as fuel cell electrolytes, the operation temperature can be reduced to 400-500 degrees. Therefore, the research on ceramic proton conductors could lower the production cost of fuel cells. 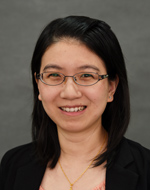 Qianli Chen received her doctoral degree of science from ETH Zurich in 2012. She joined JI in 2015. She has been selected as the Alexander von Humboldt Fellow and the Young Scientific Talent of YANG FAN Program, Shanghai Science and Technology Commission.

Nature Communications is an open access, multidisciplinary journal dedicated to publishing high-quality research in all areas of the biological, physical, chemical and earth sciences. Papers published by the journal aim to represent important advances of significance to specialists within each field.