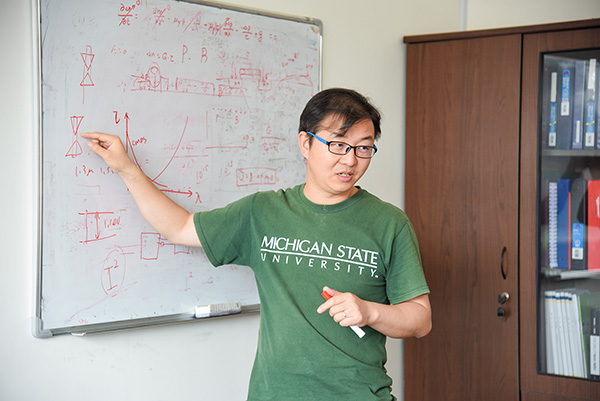 He has academic degrees and work experience of the world’s top universities, boasting teaching routines imparted by renowned professors. However, he chooses not to do a familiar work with ease and cite the classics. Instead, he makes innovations and pioneers new paths. It is him who created distinctive “smart classes” at Shanghai Jiao Tong University, established “subversive theories” to overthrow the predecessors’ and fostered outstanding “innovative talents”. He is Yaping Dan, an associate professor of the University of Michigan-Shanghai Jiao Tong University Joint Institute (JI) and the winner of 2019 SJTU Teaching and Education Award.

After studying and working in famous universities in the United States including University of Pennsylvania and Harvard University, Yaping Dan chose to return to China and became a faculty member of SJTU in 2012.

To date, the first lesson at SJTU still remains fresh in his memory. “When I first stood on the platform and confronted more than 60 young faces, my hands trembled, as from that day on, whatever I teach may have a long-term impact on the future path of the students. But I soon realized that just like many excellent teachers at SJTU, as long as we keep in mind that we should put students first as well as think and do things from the students’ point of view, it is a good start.”

When Yaping was doing postdoctoral research at Harvard University from 2008 to 2012, he learned from Professor Eric Mazur, an internationally celebrated physicist and educator, and asked him how to improve the quality and efficiency of his reports and lessons. Professor Mazur, who holds many titles in Harvard University and international academia, is the inventor of Peer Instruction which believes that discussion and learning among students in class is an effective way to promote classroom teaching and improve teaching quality. Peer Instruction reforms the traditional classroom teaching mode, realizes students’ cooperation and interaction in the classroom, and effectively improves the quality of education and teaching.

Professor Dan in discussion with students at his office

How to make the lessons clear and easy to understand, and make the students fond of learning and happy to learn, was the first priority for Yaping. He first tried to combine Peer Instruction with classroom teaching, but soon found that the method had some limitations. The method needs more powerful intelligent hardware and software support, can only be implemented in specific classrooms, and can not meet the teaching needs of domestic universities perfectly. Therefore he reorganized his teaching content and form, and gradually invented teaching methods suitable for the domestic environment.

After several semesters of attempts, Professor Dan finally made a successful change of teaching philosophy and introduced a more feasible classroom teaching method, namely “last-ten-minutes” method. This method uses the last ten minutes of the class to assign one or two exercises covering the main contents of the class on that day. During the exercises, students can discuss, look up in books and consult classmates or even teachers, but they need to finish and submit them before class is over. The scores are included in the total assessment and account for about 5% of it.

“ The ‘last-ten-minutes’ method is not only for the summary and review of knowledge, but also the process of enhancing communication and learning among students. The collision of ideas and the awareness of cooperation and openness are all precious qualities of scientific research, which I hope they can feel and nurture from the very beginning.” Yaping Dan said in explaining his teaching philosophy.
It has been proven that this teaching method is especially suitable for large-scale classroom teaching in domestic universities. Many students reflect that this teaching method promotes students’ mutual learning and discussion, and effectively improves their learning efficiency and interest in knowledge.

“In the last ten minutes of each lesson, Professor Dan gives us a quiz according to the content of the lesson no matter what happens. Although it is very difficult, it is very helpful for us to grasp the key content. Because if any student is lazy or fails to grasp the key points, it will soon be reflected in the process,” said Xuejiao Gao, a JI Ph.D. student majoring in Electronic Science and Technology. 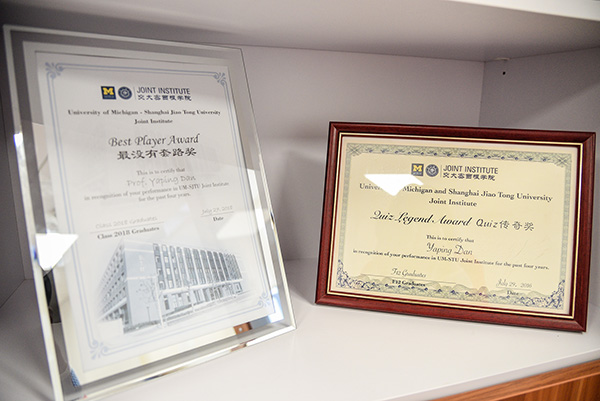 In light of the above, Yaping Dan gains support and love from many students. In 2017, a public open voting by all the graduates of JI decided to award him the honor of “the Best Player Award”. In 2018, he again won the votes from SJTU students and were successfully awarded the 2018 SJTU “Kaiyuan Top Ten Teaching Award”.

In 2010, during his postdoctoral career at Harvard University, Yaping Dan accidentally attended a lecture by Professor Eric Mazur. In the lecture, Professor Mazur mentioned that the photoconductive gain in black silicon is very high, and explained that the reason is the defect state by using the principles already written in the classical semiconductor physics textbooks at home and abroad. Yaping Dan had doubts about it. He thought it wasn’t that simple. Due to lingering doubts in his mind, he embarked on the road of seeking truth to convince himself.

In 2013, he taught the course Introduction to the Principles of Semiconductor Devices at SJTU. In the course of deducing formulas one after another, he suddenly caught an inspirational flash, finding the error in of semiconductor gain theory that had been hovering in his mind for many years: the boundary conditions were not taken into account. His doubts have been answered, but what is the correct theory? When everyone thought it was over, Yaping Dan steadfastly embarked on a new journey just because the pursuit of rigour and challenging the unknown are the charm of science and also the instinct of scientists.

The chart and formula used by Professor Dan’s research team

In 2018, the research team led by Professor Dan spotted two mistakes in the existing theory after years of research and experiment and put forward the right ones. Their research findings were published in ACS Photonics, a world-acclaimed journal in the field of chemistry. The team found that optical gains observed in experiments have nothing to do with the ideal semi-conductor photoconductive device itself, but are caused by the capture effect of the defect state or depletion region inside the semi-conductor. The finding is expected to cause modifications in semi-conductor physics textbooks worldwide. After 6 months’ review and discussion, their conclusions were finally verified by 6 reviewers from ACS Photonics.

Professor Dan at a mini-workshop at JI

Yaping Dan’s passion and persistance for academic research motivates his graduate students and wins him respect from undergraduates of his classes.

Yueyuan Li, a third-year student in Electrical and Computer Engineering at JI, is a staunch fan of Professor Dan. He recalls, “I could not understand the basic theories at first. Wave and Schrodinger Equation, for example, was too abstract for me to understand. When I asked Professor Dan for help, instead of giving me a lengthy and complex definition, he taught me to figure it out myself, saying that we can deduce the equation within five minutes. Standing in front of a blackboard, Professor Dan encouraged me to deduce the equation step by step. Starting with quadratic calculus, he guided me to analyze from the point of wave-particle duality. Eventually, I managed to deduce the equation and more importantly, I got across the theory. I admire Professor Dan for his thorough understanding of every theory in the field.”

Professor Dan attaches great importance to both innovation and guidance, and puts students first with respect and understanding, which is his teaching philosophy. He believes that every student has different personalities and only by encouraging them to do advanced and cutting-edge researches, can we nurture research-oriented talents.

Professor Dan and his research team

Under his guidance, many of his graduate students participated in his research projects and published over 40 papers in world-class journals including Nature Communications, Nano Letters and ACS Nano in the past few years. They challenged the classical theory with a history of 50 years in photoconductive device gains, which is expected to cause modifications in physics textbooks worldwide. In the field of Si-based light-emitting, they made efficient room-temperature light-emitting a reality, a huge breakthrough over the past 3 decades which wins them support from Major Innovation Research Project, Shanghai Municipal Education Commission. They solved the “Post-Moore law” plight by initiating “Atom Manufacturing” concept and relevant researches. Their research drew Huawei’s attention, which subsequently supported the project with generous funding.

Xingyan Zhao was Professor Dan’s first Ph.D. student. At the beginning, she was so unconfident that she even wanted to switch to a Master graduate program. Professor Dan encouraged her to make the right decision by balancing her personal interests and career plan. Xingyan Zhao restored confidence and made up her mind to pursue her Ph.D. degree and academic research. In 2018, she obtained her Ph.D. from JI and continued with post-doctoral studies under the supervision of Professor Dan. In 2019, Doctor Zhao was shortlisted for “National Postdoctoral Program for Innovative Talent”, a new project jointly established by Ministry of Human Resources and Social Security, and National Post-doctoral Administrative Committee. Aiming at supporting outstanding young talents, the project is known for the fierce competition.

Over the past years, every Ph.D. student and postdoctoral student supervised by Professor Dan has made outstanding achievements. After obtaining his Ph.D., Haigang Wu worked at Henan University as a lecturer. After being shortlisted for the “One Thousand Talents Program in Central China”, Haigang Wu is currently visiting Columbia University as a scholar. Xuejiao Gao was titled “Outstanding Graduate of Shanghai Jiao Tong University in 2018” when she graduated and won the Best Poster Award for the “Global Material Innovation Seminar” hosted by American Chemical Society in the same year. She is currently working as a postdoctoral student at Nanyang Polytechnic University in Singapore. Three postdoctoral students, Xiuli Chen (Ph.D., University of Sheffield, UK), Bin Guan (Ph.D., University of New South Wales, Australia) and Huimin Wen (Ph.D., Chinese Academy of Sciences), have been engaged in research for two to three years in his research group, and currently work at the National University of Singapore, the University of South Australia and School of Electronic Information and Electrical Engineering, Shanghai Jiao Tong University, respectively. Among them, both Bin Guan and Huimin Wen received funding from the National Natural Science Foundation youth project during their postdoctoral period. 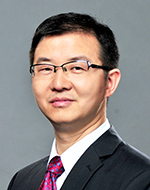 Yaping Dan is a special researcher (professor) of Shanghai Jiao Tong University, a tenure-track Associate Professor and Ph.D. advisor at the UM-SJTU Joint Institute (JI). He received his Bachelor degree from Xi’an Jiaotong University, 1999, Master’s degree from Tsinghua University in Beijing, 2002, and Ph.D. from the University of Pennsylvania, 2008., Prior to joining JI in 2012, he worked as a postdoctoral fellow at Harvard University after Obtaining his Ph.D. His research interests are Si-based optoelectronics and monatomic electronics. Devoted to providing key solutions for future advanced integrated circuits and quantum computing, he has led many major research projects at national or regional level and has published over 40 papers on world’s top journals including Nature Communications.