The 62nd Turbomachinery Technical Conference & Exposition, organized by the International Gas Turbine Institute (IGTI) and the American Society of Mechanical Engineers (ASME) was held in Charlotte, North Carolina from June 26 to 30, 2017. Dr. Haiteng Ma, who earned his doctoral degree from the University of Michigan-Shanghai Jiao Tong University Joint Institute (UM-SJTU JI) in 2016, received the best paper award of ASME Turbo Expo 2016 for his paper titled “Cooling Injection Effect on a Transonic Squealer Tip – Part 2: Analysis of Aerothermal Interaction Physics.” The award is one of the highest academic honors in the field of gas turbines. Ma was China’s only winner at the top international conference, marking that JI’s achievement in the research of gas turbines is highly recognized by the international academia and industry.

First page of the awarded paper 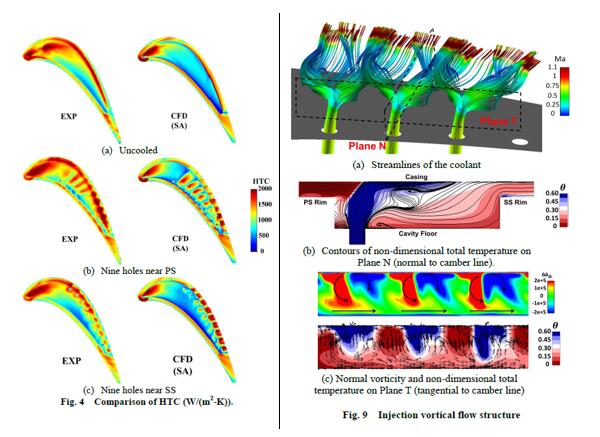 Ma’s paper is the result of his doctoral research at JI, supervised by Professors Qiang Zhang and Lipo Wang and exchange research at the University of Oxford, supervised by Professor Li He, with the assistance of Zhaoguang Wang, a JI Master student. The topic is on the design of the gas turbines blades, which tackles basic scientific issues of the cutting edge technology and has great application potentials. Based on experiments and computational fluid dynamics (CFD), Ma found that under the transonic condition, cooling of the blade tip of the high-pressure turbine presents a unique aerothermal behavior. The paper explores the physical mechanism behind this unique phenomenon and reveals the strong interaction effect of the tip leakage and cooling airflow, which is of great significance for gas turbine design. Ma’s paper has been published in “Journal of Engineering for Gas Turbines and Power,” a world’s top journal in the field of gas turbines.

Founded in 1957, the ASME Turbo Expo has been the largest and most influential event in the field of gas turbines, attracting experts from the academia, industry and governments around the world, including Oxford, Cambridge, MIT, Stanford and NASA. It also brings together the best engineers from industrial giants such as General Electric, Siemens, Rolls-Royce, Mitsubishi, Pratt & Whitney, etc. Through the recommendation of the conference organizers, 30 papers were awarded as the best papers in recognition of the author’s outstanding contribution to the international gas turbine industry.

Dr. Haiteng Ma, Ph.D., studied at the graduate school of JI from September 2011 to September 2016, under the supervision of Professor Qiang Zhang and Professor Lipo Wang. He studied with Professor Li He at Oxford University in 2015. He was engaged mainly in research related to gas turbine heat transfer and aerodynamics. Ma has published four papers in SCI journals (three first-authored) and six conference papers at ASME Turbo Expo, with four oral presentations. Ma has received the ASME Turbo Expo Best Paper Award and the IGTI Student Scholarship. He has served in the IGTI Student Advisory Committee, organizing student activities with European and American doctoral students. Ma is currently working at the Siemens Corporate Technology, engaged in the research and development of gas turbine technology.