Professor Shen and his co-investigator, Professor Carlos E.S. Cesnik from UM, have developed a highly efficient modeling technique for studying nonlinear scattering of ultrasonic-guided waves from fatigue damage that can be used to improve structural health monitoring systems in both design and signal interpretation stages. The paper put forth a novel methodology using the Local Interaction Simulation Approach (LISA) and Compute Unified Architecture (CUDA) to parallelize the computation of ultrasonic wave phenomena in solids. A penalty method was implemented to capture the contact dynamics at the crack interfaces during nonlinear wave damage interactions. Distinctive selective-mode participation phenomena and higher harmonic scattering features were noticed during wave crack interactions. Their findings were presented at the 2016 ASME IMECE in Phoenix, Arizona. And the award was given a year after fierce competition and rigorous rating among top tier experts in the field.

As the largest interdisciplinary mechanical engineering conference in the world,  ASME’s IMECE aims to stimulate innovation from basic discovery to application, showcase the latest scientific research achievements, and explore the future research directions. 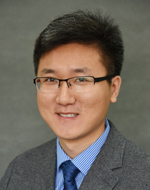 Yanfeng Shen is an assistant professor and special associate researcher at the UM-SJTU Joint Institute. He received his Bachelor of Science degree in engineering mechanics from Wuhan University in 2010 and doctoral degree in mechanical engineering from the University of South Carolina in 2014. Thereafter, he worked as a Postdoctoral Research Fellow in the Department of Aerospace Engineering at the University of Michigan. In 2016, he started his tenure-track faculty position at the Joint Institute. His research interests cover structural health monitoring; guided waves; nonlinear ultrasonics; active materials and smart structures; and advanced computational mechanics.