In recent years, breakthroughs in Artificial Intelligence and Robotics led to tremendous successes in various application areas. In this talk we try to cover three separate topics underpinned by the same theoretical research on information architecture of multiagent systems. We will present samples of its applications in multi-robot formation control, cooperative sensing, robotic arms in a lab, and more recently, multi-omics data platform. Finally, we will sketch a research plan of how to improve some fundamental aspects in life science and health studies through advancing cross disciplinary technologies including AI and robotics. 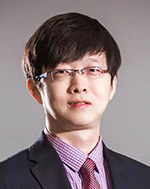 Changbin Yu received B.Eng(Hon1) from NTU Singapore, and PhD from ANU, Canberra. He joined ANU in 2008 and received Australian Research Council’s APD and QEII Fellowships; he gained tenure and was appointed an Associate Director (international) in Engineering at ANU in 2014. He was with Westlake University between 2017-2020, establishing its AI and Robotics Centre as a founding PI. He was appointed by Curtin University as an Optus Chair Professor in AI & Dean of Research(Asia) in 2019. In Oct 2020 he became the founding Dean, College of Artificial Intelligence and Big Data for Medical Sciences, Shandong First Medical University.

He was elected a Fellow of the Institution of Engineers Australia (2015), an IEEE Senior Member (2010), a Technical Committee Member of the International Federation of Control IFAC (2012), Corresponding Member of National Committee of Automation Control and Instrumentation(NCACI) Australia, etc.

He received numerous awards and recognition including the prestigious John Booker Medal (2019) from Australian Academy of Sciences; Endeavour Asia Award (2005) and Endeavour Executive Award (2015) from Australian Government, those from AAS and ASTE, and Chinese Central and Provincial Governments. He is a co-awardee of 2021 First Prize in Natural Sciences of China Automation Association.