Intelligent systems are characterized by their ability to sense their surroundings, analyze the surrounding signals, and provide a logical response. Intelligence is exhibited in many complex biological systems such as human beings and animals. Materials (e.g., brick, wood, or polymer), however, are generally regarded as static, passive, and far from being considered as “intelligent”. 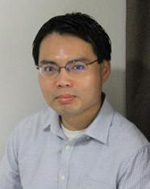 Siowling Soh received his Ph.D. degree from Bartosz Grzybowski at Northwestern University and studied under George Whitesides at Harvard University as a Post-doctoral Fellow. His current research at the National University of Singapore is highly interdisciplinary that includes materials science, physics, and chemistry. His research involves responsive, programmable, and functional polymers and separation of charge at interfaces of matter for creating intelligence in materials. These fields of research have applications in healthcare (e.g., targeted drug delivery), clean energy, and flexible electronics. He is currently the lead organizer of a new symposium (SF01) at the MRS Fall meeting, Young Investigator at ACS Applied Materials & Interfaces, Fellow of the Royal Society of Chemistry, and Editorial board member of the Journal of Controlled Release due to his works on smart drug delivery systems.