The Michigan-Shanghai Jiao Tong University Joint Institute (UM-SJTU JI, JI hereafter) 2020 Summer Design Expo opened online on August 5, displaying 41 innovative design projects from a number of summer experimental courses of freshmen and senior students including “Introduction to Engineering” and “System Design and Implementation”. Thanks to the global coronavirus pandemic, virtual exhibition halls were created, where the participants can log in via website or ZOOM APP to view the students’ design works. On-the-ground booths were also set up to serve limited number of students, parents and enterprise representatives visiting the Long Bin Building personally. 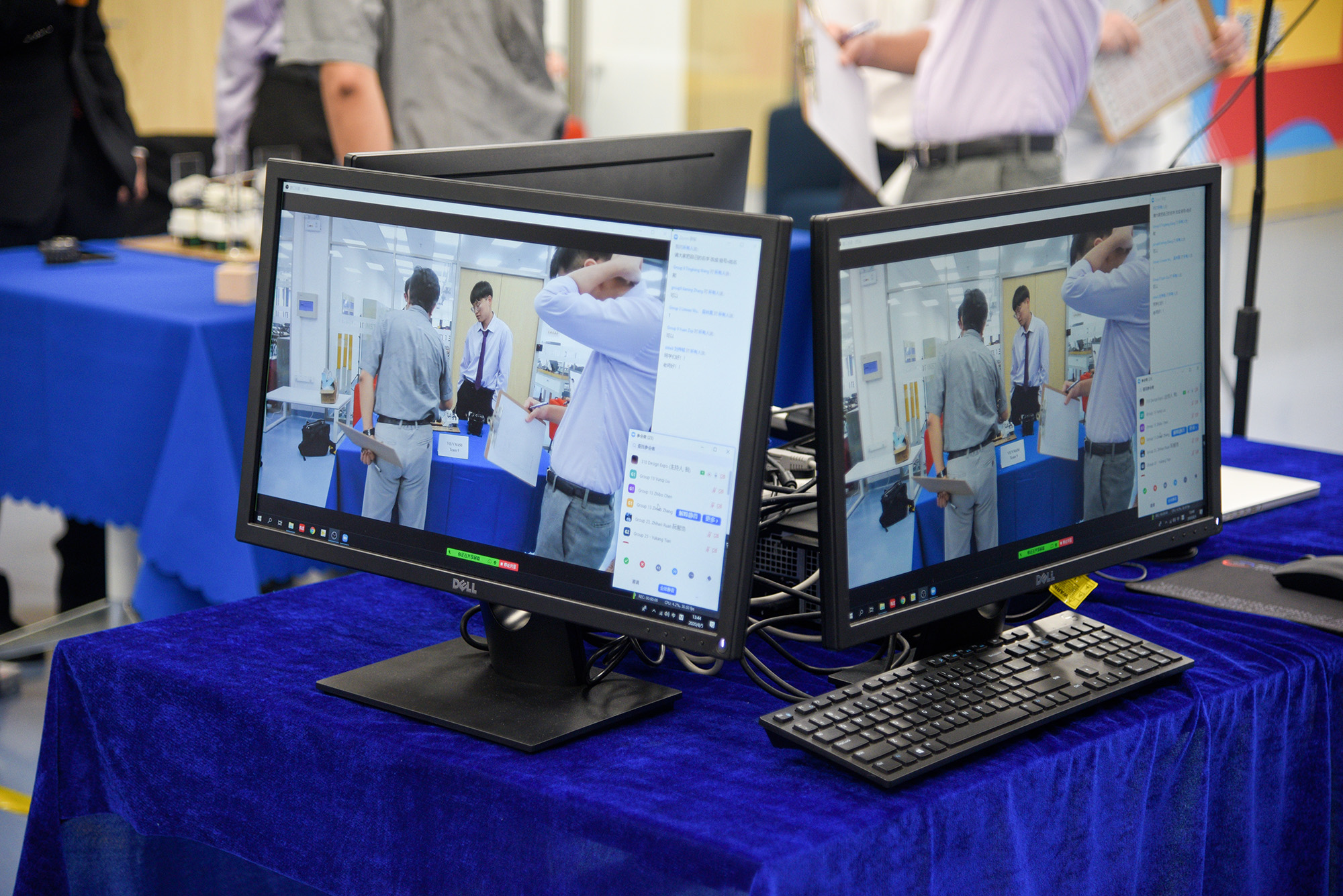 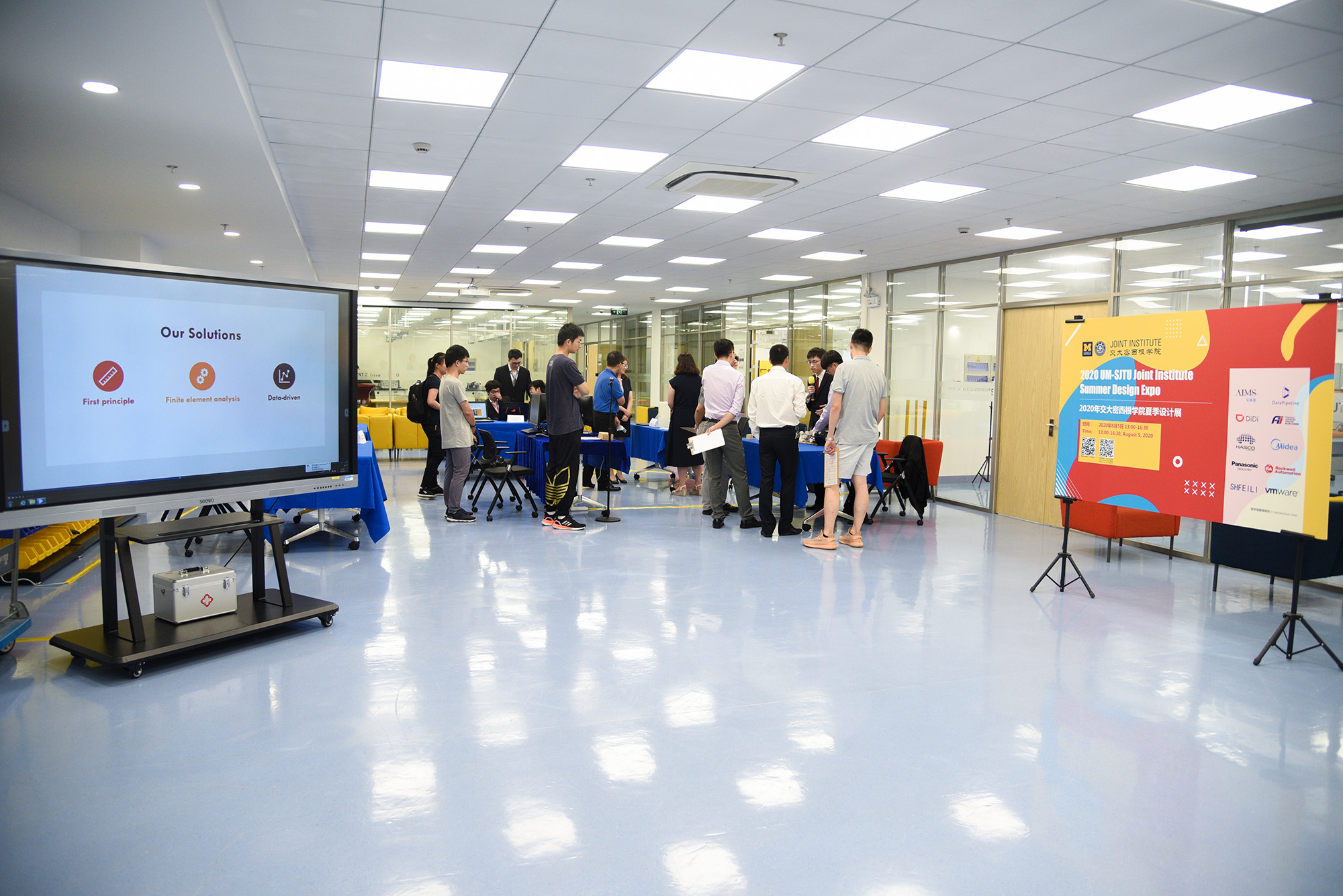 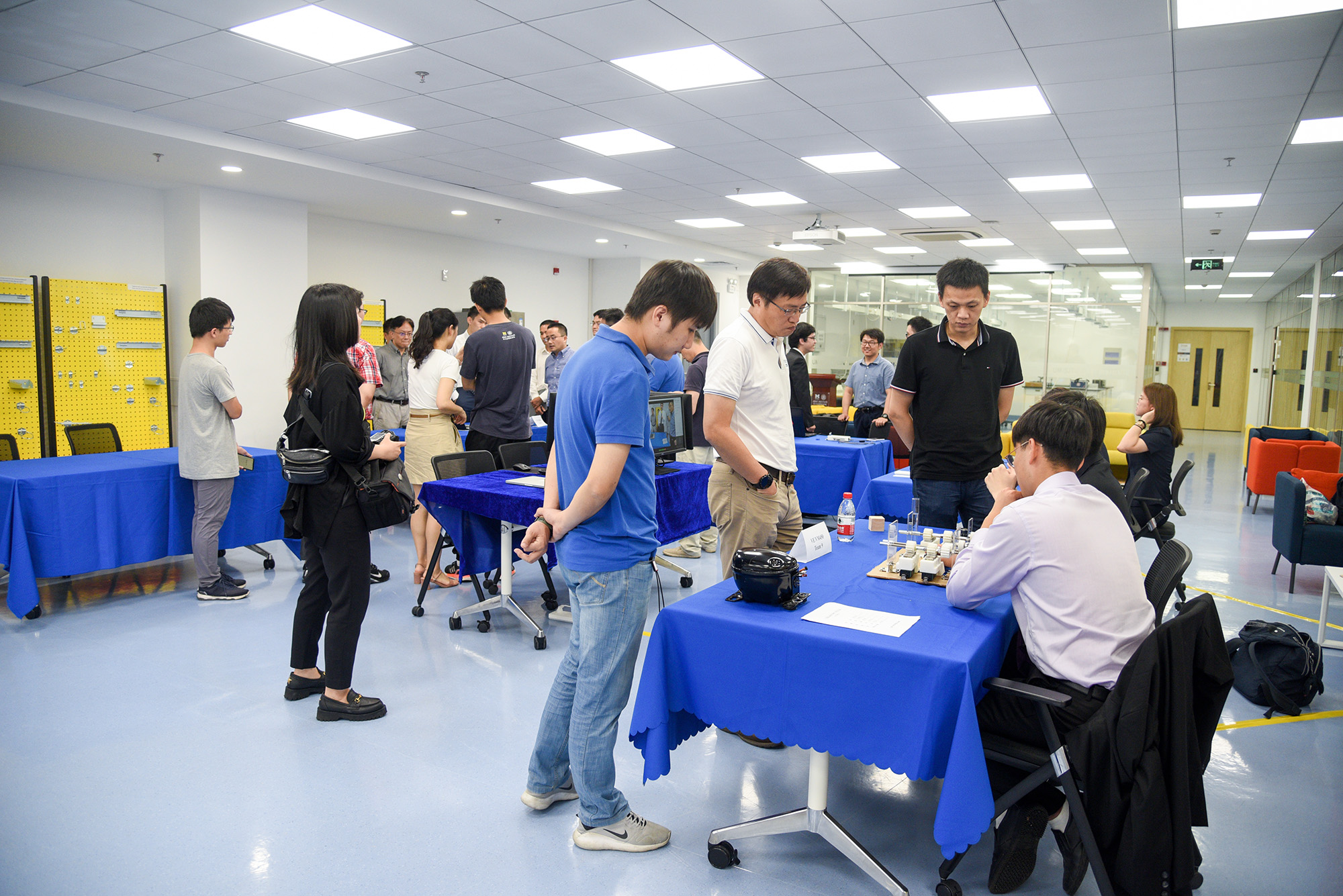 Offline display of some enterprise-sponsored projects

In an unusual year of 2020, JI students with strong sense of social responsibility put their focus on the reform of science and technology under the pandemic influence. Many offered solutions of digital transformation for the post-pandemic era. 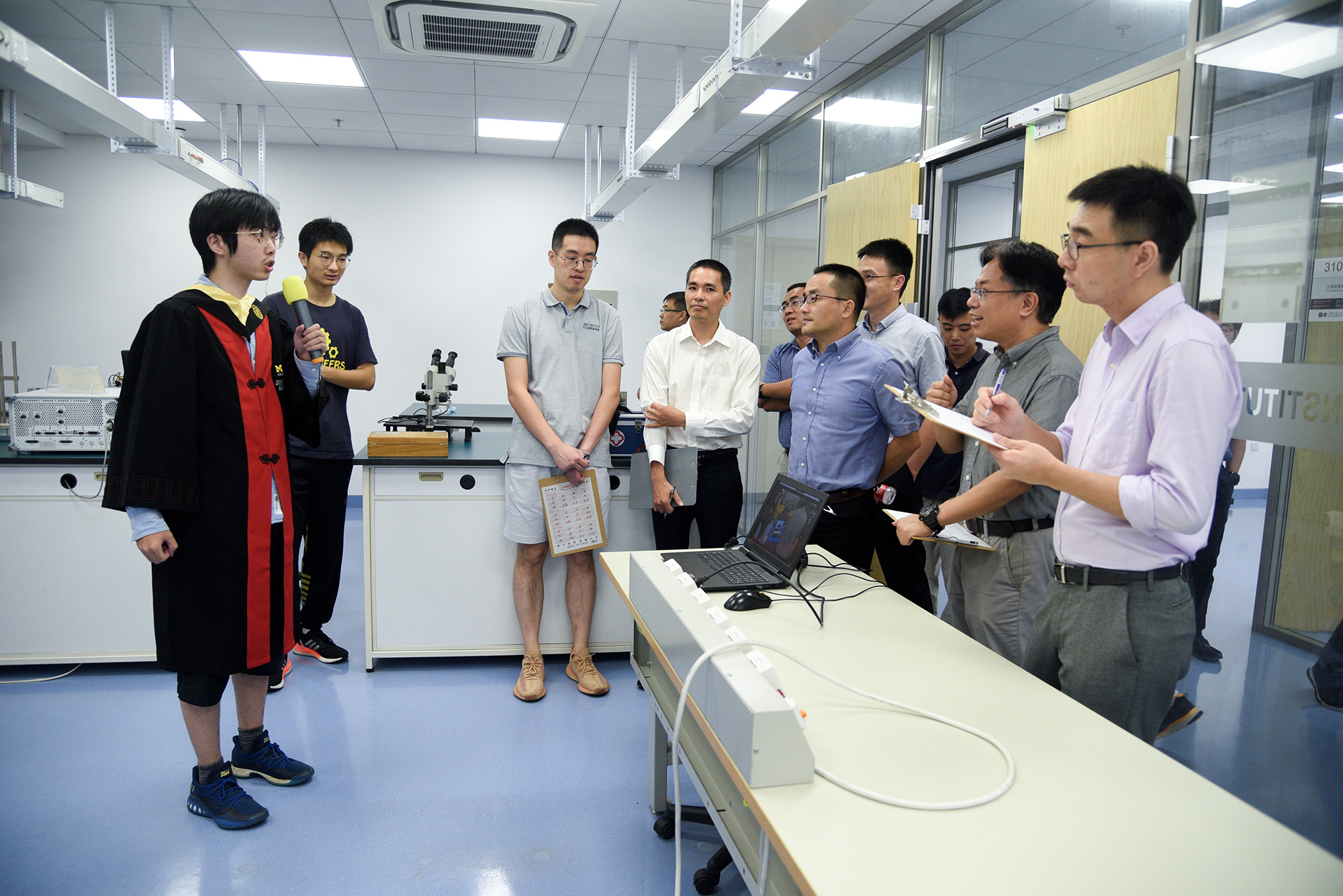 The widespread Covid-19 has brought a huge disaster to the human society. To prevent the spread of disease, surveillance and human traffic detection in crowded areas like airports and schools become necessary, which calls for a high demand of automatic tools to process the massive data. The Real-time On-device Flow Statistics Detection and Prediction project team comes up with a solution based on computer vision and IoT technology which can offer data storage capability, human traffic surveillance with elegant user interface. The terminal of the designed surveillance system is a raspberry pi with a high-resolution camera, serving to process video data via computer vision algorithm and transmit processed data to the backend server. The server stores the data into a database. A backend API is provided for frontend to get historical data. We also implement an elegant frontend user interface to visualize these data. The system with functions of automatic entrance detection and human traffic prediction is expected to be applicable in the post-pandemic era. 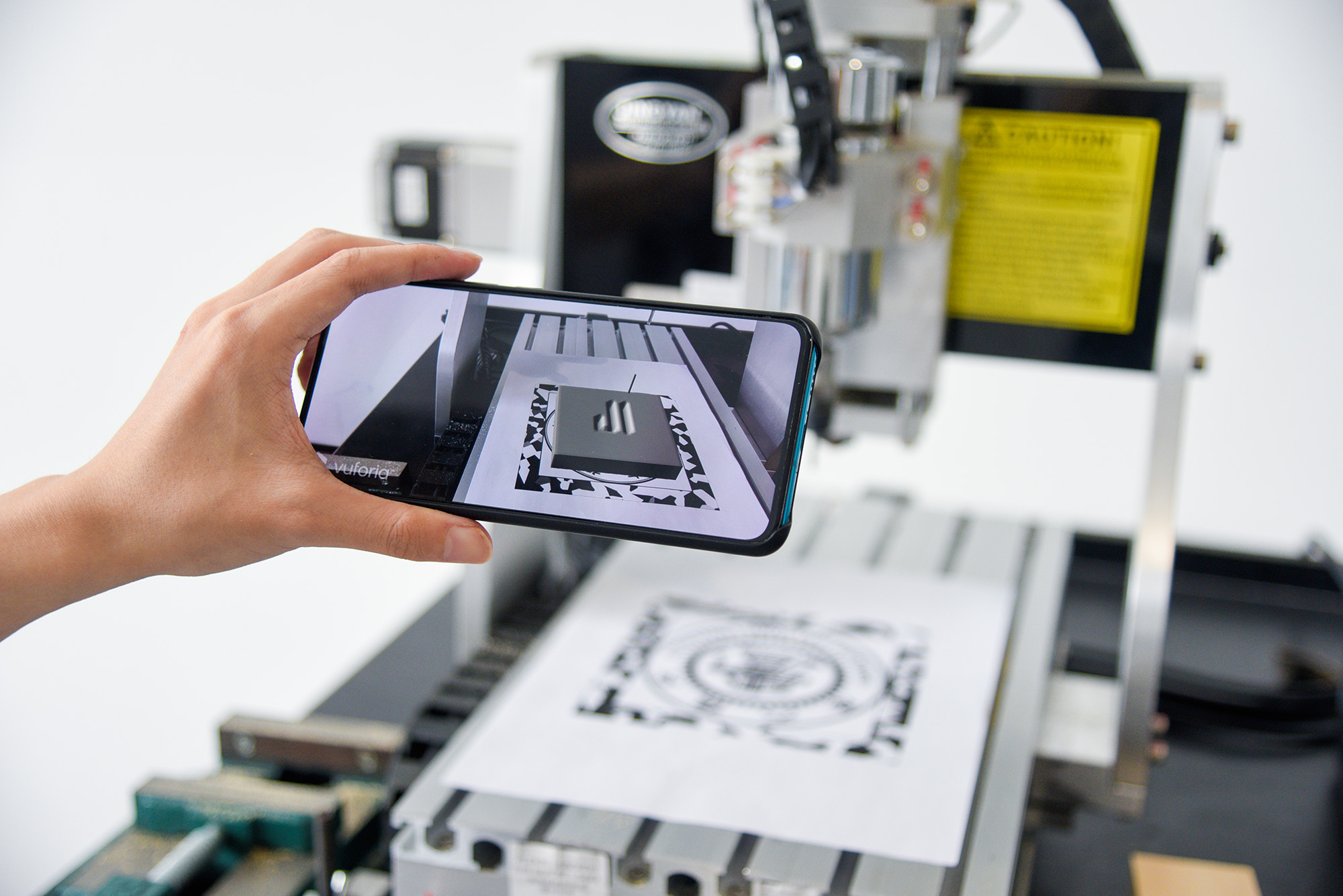 Control of Virtual and Real Manufacturing Systems via AR/VR Techniques

Virtual Learning and Smart Factories have been heated topics in Manufacturing Industry. The importance of creating Digital Twins for manufacturing machines is becoming more evident after the breakout of the coronavirus pandemic. How can engineers manipulate machines from distance? How can students learn using manufacturing systems online? The Control of Virtual and Real Manufacturing Systems via AR/VR Techniques project team chooses to use Virtual Reality and Augmented Reality technology to synchronously show and simulate the manufacturing process of milling artifacts. With the systems developed by the team, users can use a VR handle or globes to control a CNC milling machine. Then the commands will be sent to the milling machine in real time and a 3D model of the machine as well as the artifact will show up in the VR headsets. Users can also see the milling process via the simulation. Additionally, a user can manually control the CNC milling machine while the data will be recorded and sent to other users, where they can watch the manufacturing process simultaneously. On top of the VR system, the project implements an AR application which can be deployed on mobile devices like IOS and Android smartphones. With this app, for instance, users can use their phone to watch the manufacturing process without manipulating a real machine. The app would track and locate specific tags and display the virtual model on top of camera images.

Age of Plague: After the Apocalypse

Inspired by the unprecedented outbreak and spread of Covid-19 worldwide, Team LJWZ developed a virus-themed game named Age of Plague: After the apocalypse. The background of the game is set on the earth in 2049. After the coronavirus pandemic and a series of following disasters, global population witnesses a large decrease. Due to the lack of national unity, countries no longer exist. Instead, independent city-states take over the rule work. After the apocalypse, the survivors have to face a new global crisis, fatal plagues caused by greatly infectious and mutative viruses. In the game classified as TCG(Trading Card Game), the player will play as a governor of a city, and use different cards representing different resources and technologies to fight against the plague and save the world. The basic goal is to keep as many citizens as possible alive after certain turns. Every game is played on a hex map. Every hexagon tile contains a population and can be affected by cards. Each turn, the plague viruses evolve on the map according to certain rules, and infect and kill people. Meanwhile, the player gets some “power” points to draw cards and play cards, in order to prevent the viruses from progressing. As resources are insufficient to ensure the safety of all the citizens, the player is expected to face a moral dilemma which leads to the use of strategy of sacrificing the minority to save the majority.

Participants of the JI design expo projects including not only freshmen but also senior students are encouraged to use their knowledge of engineering and relevant subjects as well as innovative thinking to solve problems discovered from their daily life.

Today’s customers have higher standards for home appliances, including refrigerators. The challenges faced by producers are mainly reflected in two aspects. First, traditional refrigerators are too monotonous in exterior appearance designs, which could not catch customers’ eyes and maintain their competitiveness. Second, traditional design of refrigerators equips insufficient intelligent systems, which leads to the lack of interaction between users and refrigerators. Both factors are stimulating the development of a new generation of refrigerators. The Midea E-Transparent Refrigerator project team therefore decided to design a fridge with a combination of innovative appearance and smart functions. The team’s e-transparent refrigerator equips a 34-inch OLED touchscreen on the right-hand side of the front door. The touchscreen can switch between normal mode and transparent mode, allowing users to see the interior food and beverages inside the refrigerator without opening the door. An ice coffee maker is embedded on the left-hand side of the front door, in order to meet young people’s daily demand. The remaining regions of the front door are made with three color-changing glasses, which can achieve a transparent effect similar to the touchscreen. Meanwhile, the recognition system consists of a four-camera set and a microphone. It not only allows users to control both the embedded functions in the refrigerator and other appliances at home but also lets the refrigerator be able to recommend personalized recipes to users by recognizing their emotions.

With the recent successful launch of China’s Tianwen 1 probe, mankind’s journey to Mars has gone a step further. Colonizing Mars no longer seems to be an impossible dream. In the era of Mars colonization, people will need huge amounts of Mars rover to save the high labor cost in exploration, collection, and transportation. But the current design of Mars rover is so integrated and customized that the production cost and maintenance expenses are overwhelmingly high. To improve the efficiency of Mars colonization, it is high time to develop a mass-produced Mars rover for general purposes. The Mars Pro Max team is dedicated to providing a modularized solution to the problem of the high cost and low efficiency in the production of Mars rovers. “Mars Pro Max” consists of 3 parts, chassis, body, and modules. It is driven by the Mecanum wheels and motors, which were fixed at the chassis. The body contains the developing boards and the power bank. It also provides some universal plugs with special designs to enable any module to connect, so that the rover can be standardized and diversified. The module is controlled through the Wireless Local Area Network (WLAN), including a camera, a robotic arm, a smart solar panel, and a disco ball. Different modules satisfy the requirements of Mars explorers, like remote control, power supply, and mobile entertainment.

Green energy is considered as the key to ease the worldwide energy crisis. But how to efficiently convert and apply the green energy still remains as a challenge to scientific research and the industry. In our daily life, thirsty people often need to face a cup of boiling water with storage of a large amount of heat to be dissipated before drinking. The Air-Magnet Green Cooling Cup team decides to work out a green cooling cup in light of such a daily problem. The cup designed by the team mainly consists of three parts: Thermal-Electric Converting System, Air-Cooling System, and Magnetic Stirring System. Thermal-Electric Converting System apply several thermal-electric modules and heat sinks, which produce electricity based on the temperature difference between the hot water and the outside surrounding. Air-Cooling System is composed of a fan which is made basing on the iterative measure-redesign process. There are vortex generators arranged on the fan blades, aiming to improve the stability and efficiency of the fan by reducing the boundary layer separations. Magnetic Stirring System works by rotating a stir bar inside the cup under the outside magnetics’ motion, so that the hot water can move to enhance the heat conduction. Both the Air-Cooling System and the Magnetic Stirring System consume the actuation provided by two motors in parallel connection. A power switch is embedded in the branch of circuit which controls the Magnetic Stirring System in order to cut off that branch to lengthen the endurance of the fan when the fan is unable to rotate.

The unprecedented global Covid-19 pandemic caused big challenges for many project teams participating the 2020 summer design expo. Many students who have to live separately in different places of China and other parts of the world can only carry out their projects via online channels. Nevertheless, all the projects were fulfilled timely and efficiently in spite of the time and space obstacles. 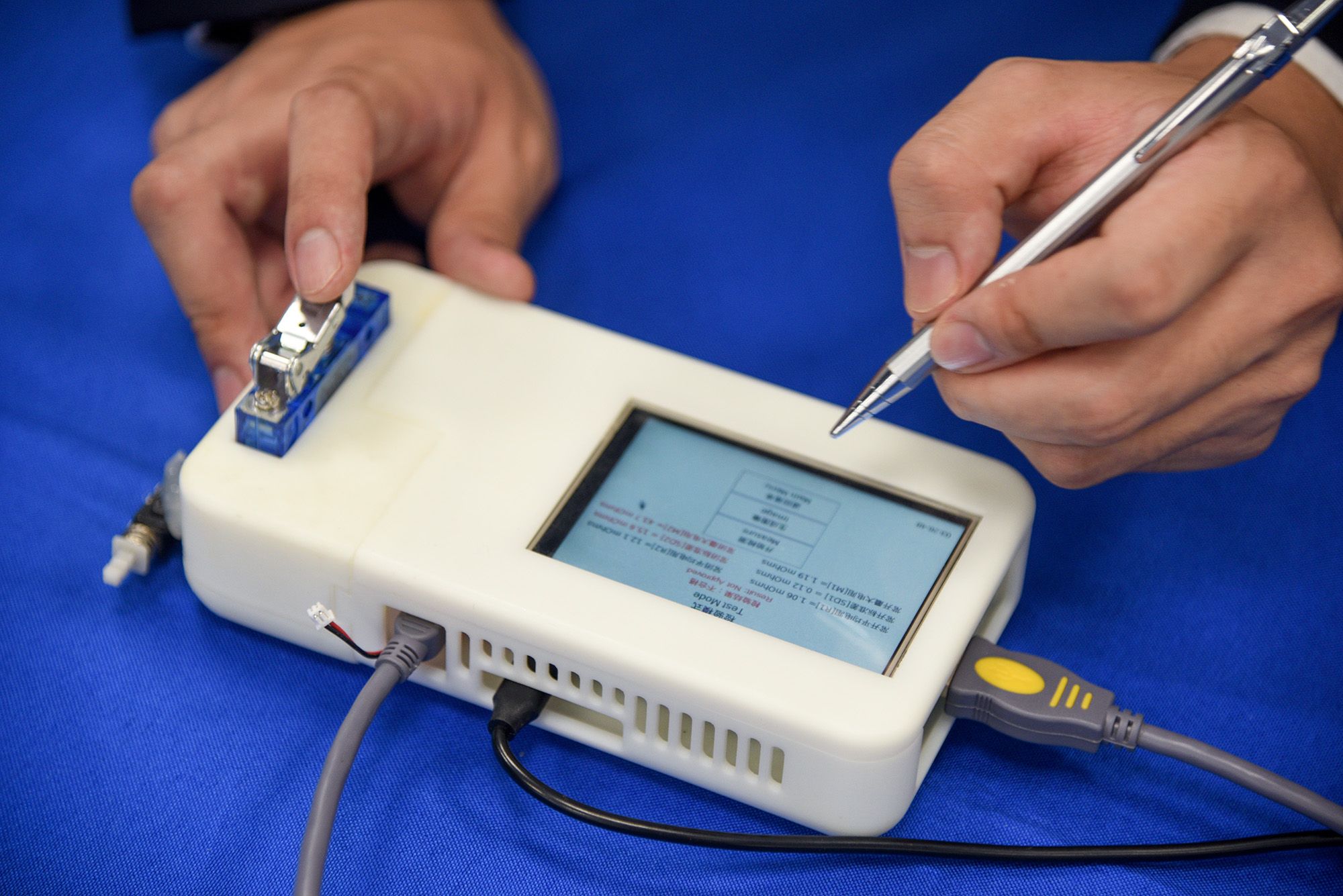 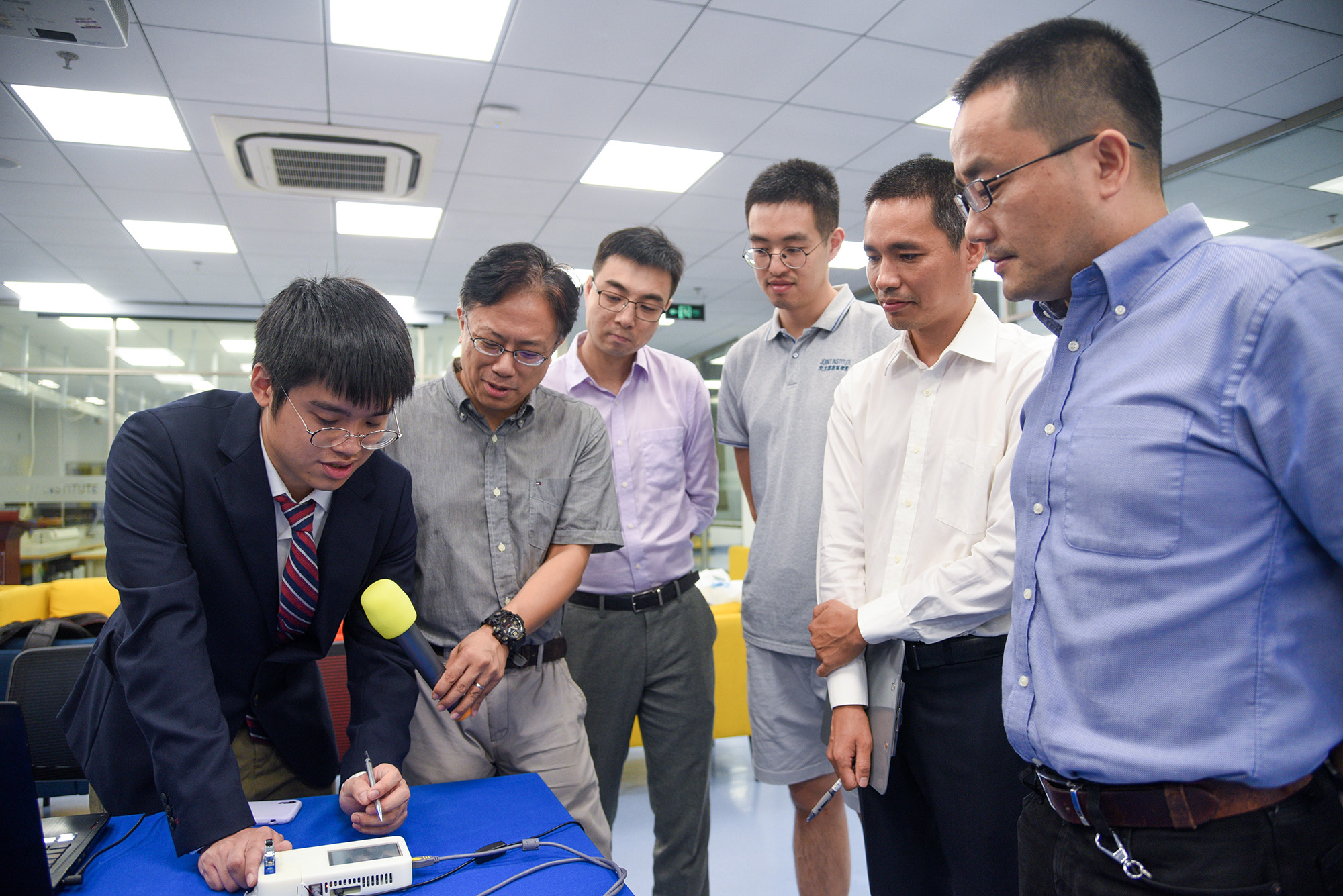 The Automatic Detection System for Switch Contact Resistance of Low Voltage Electrical Appliances team consists of students from Shanghai, Wuhan and the United States. In order to meet the requirement of their corporate sponsor Shanghai Feili Xuncheng Electrical Technology Co., Ltd., the students made a reasonable division of labor. Two students in the United States took the tasks that can be completed online including front-end development, CAD modeling and video production, while the other three students staying in China took charge of circuit design, assembly and debugging. After spending painstaking efforts, they managed to design and manufacture a set of highly integrated, convenient and compact embedded system, including measurement circuit, processor, electronic screen, and various types of adapter. The prototype of their dynamic switch contact resistance detection system was highly praised by the corporate clients. 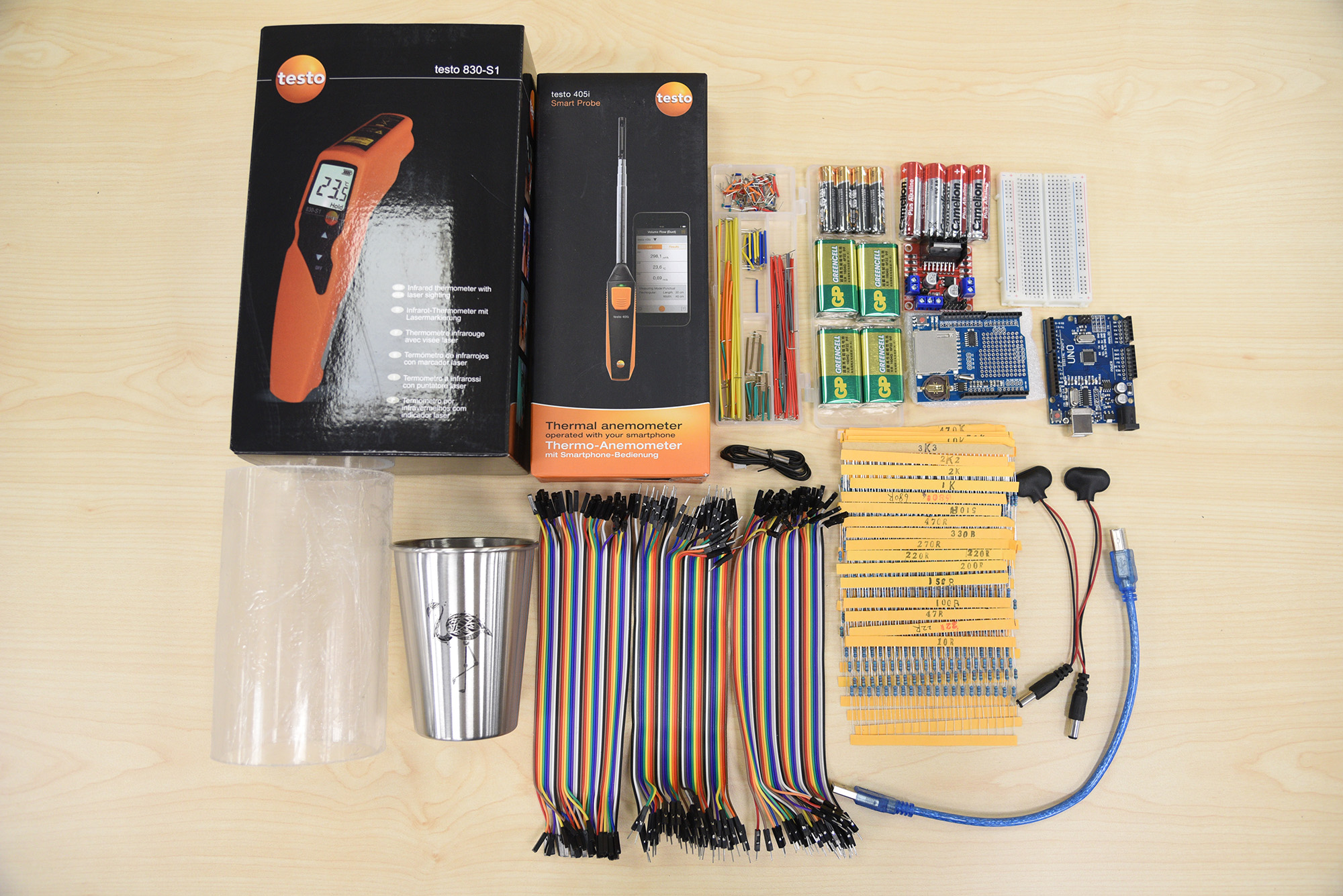 Material package for the “Introduction to Engineering” course

According to lecturers of the “Introduction to Engineering” course, in a bid to support the students’ expo projects, the Joint Institute prepared the required material package at the beginning of the course, which is sent to each student by express mail, so as to make it convenient for students to assemble and debug the design parts at home. Project teams were also regrouped to let students with closer geographical location work together. In order to adapt to the online division of labor, many project teams have come up with a modular assembly design scheme, which requires each person to take care of different modules separately, so that the teamwork efficiency can be greatly improved. 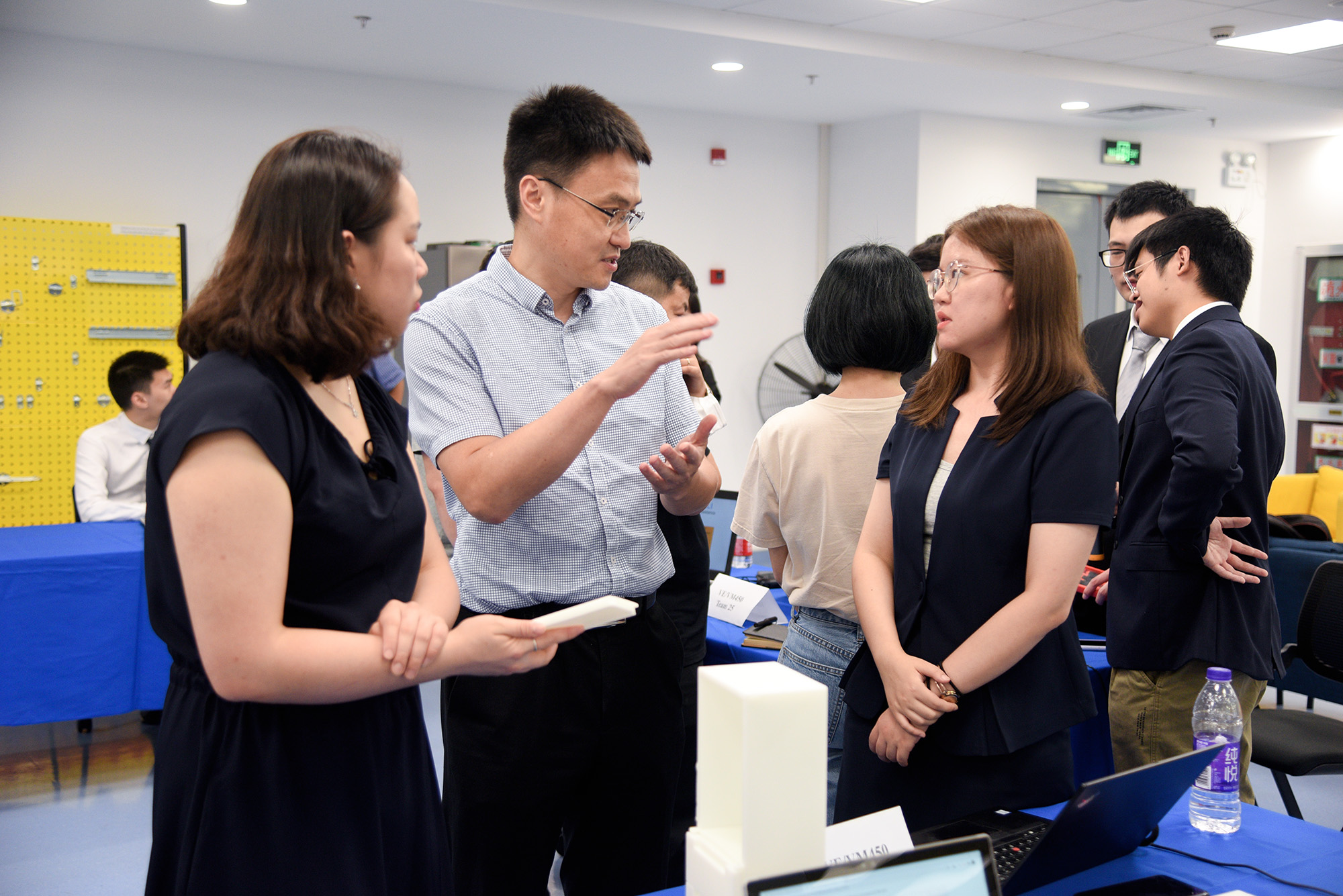 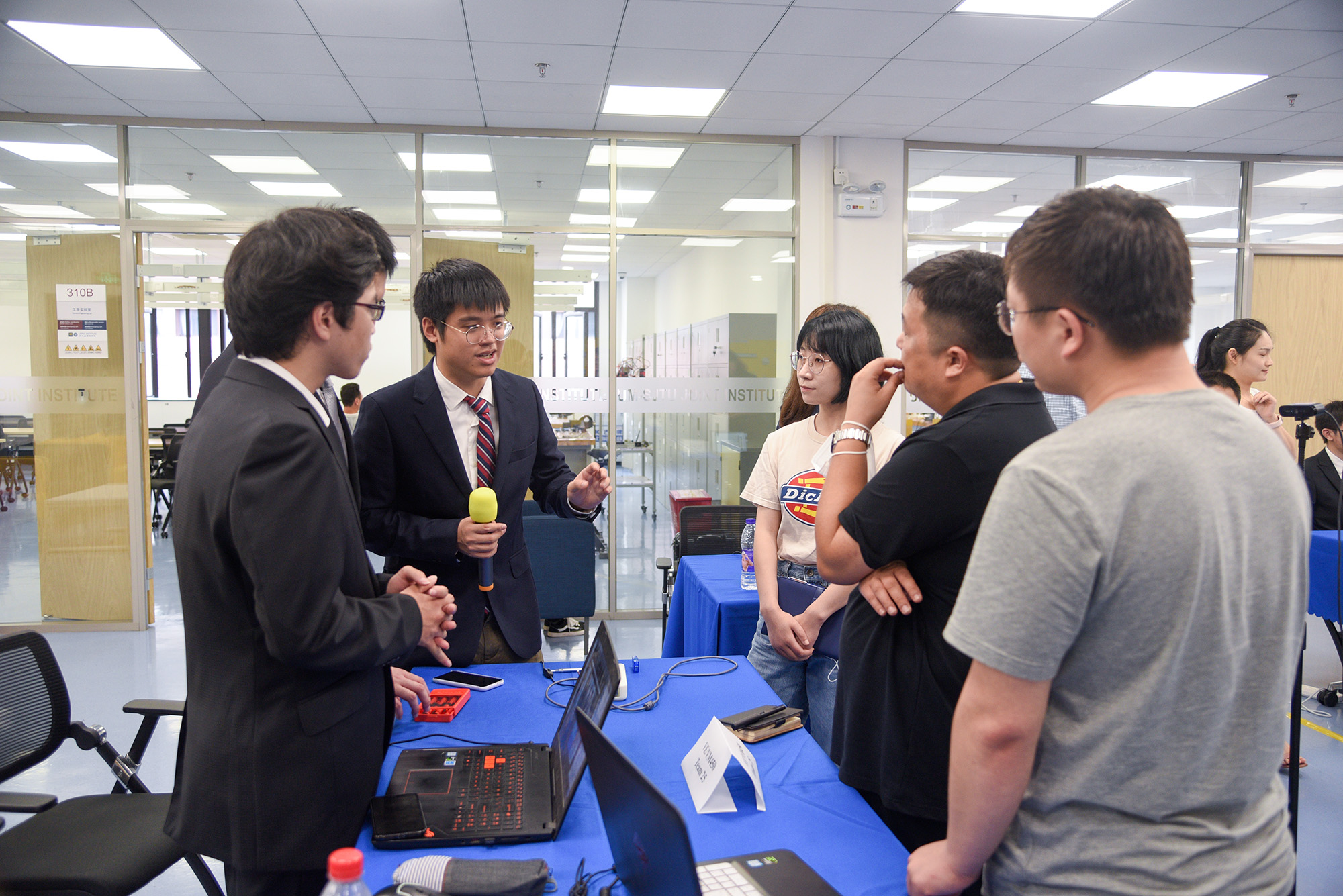 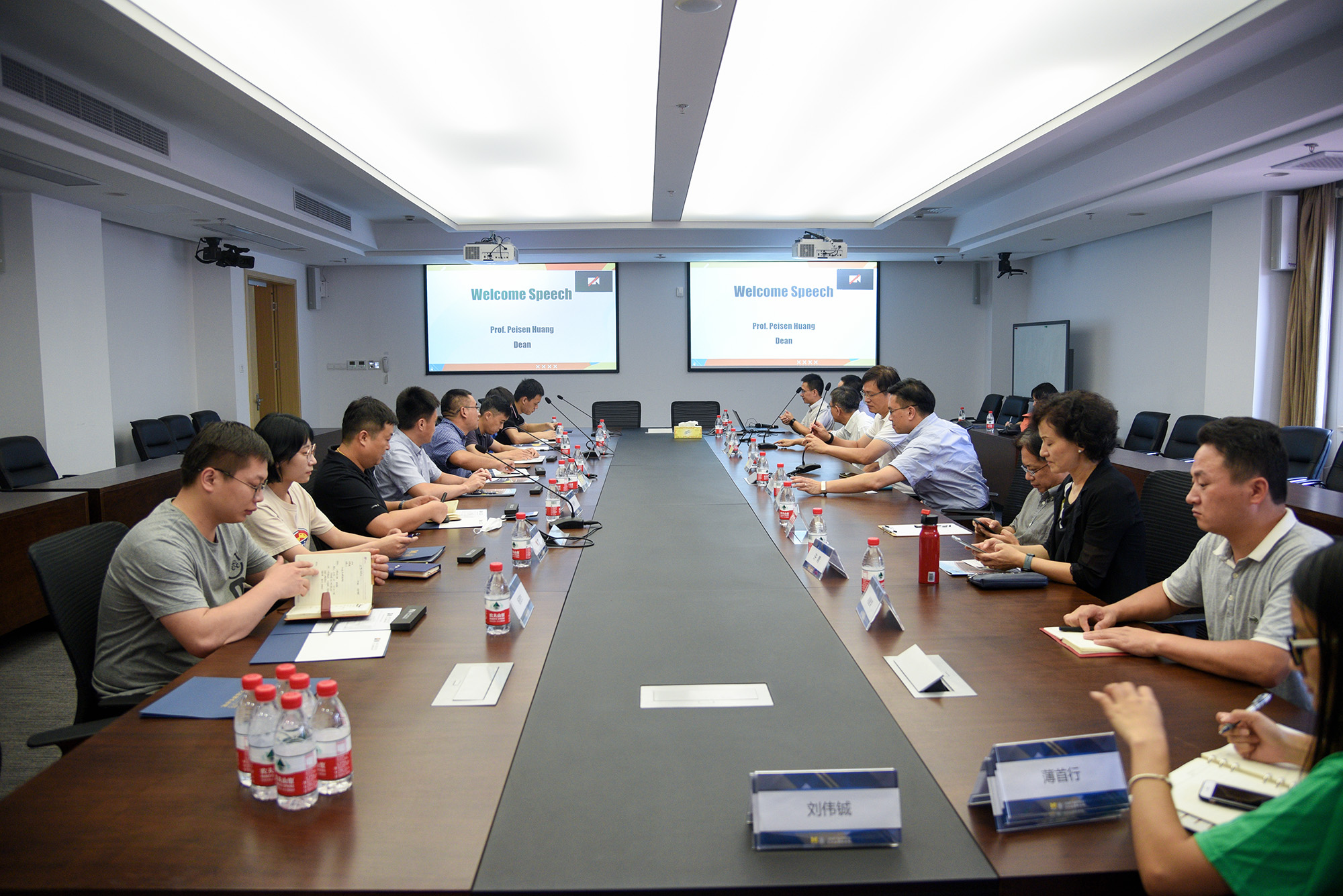 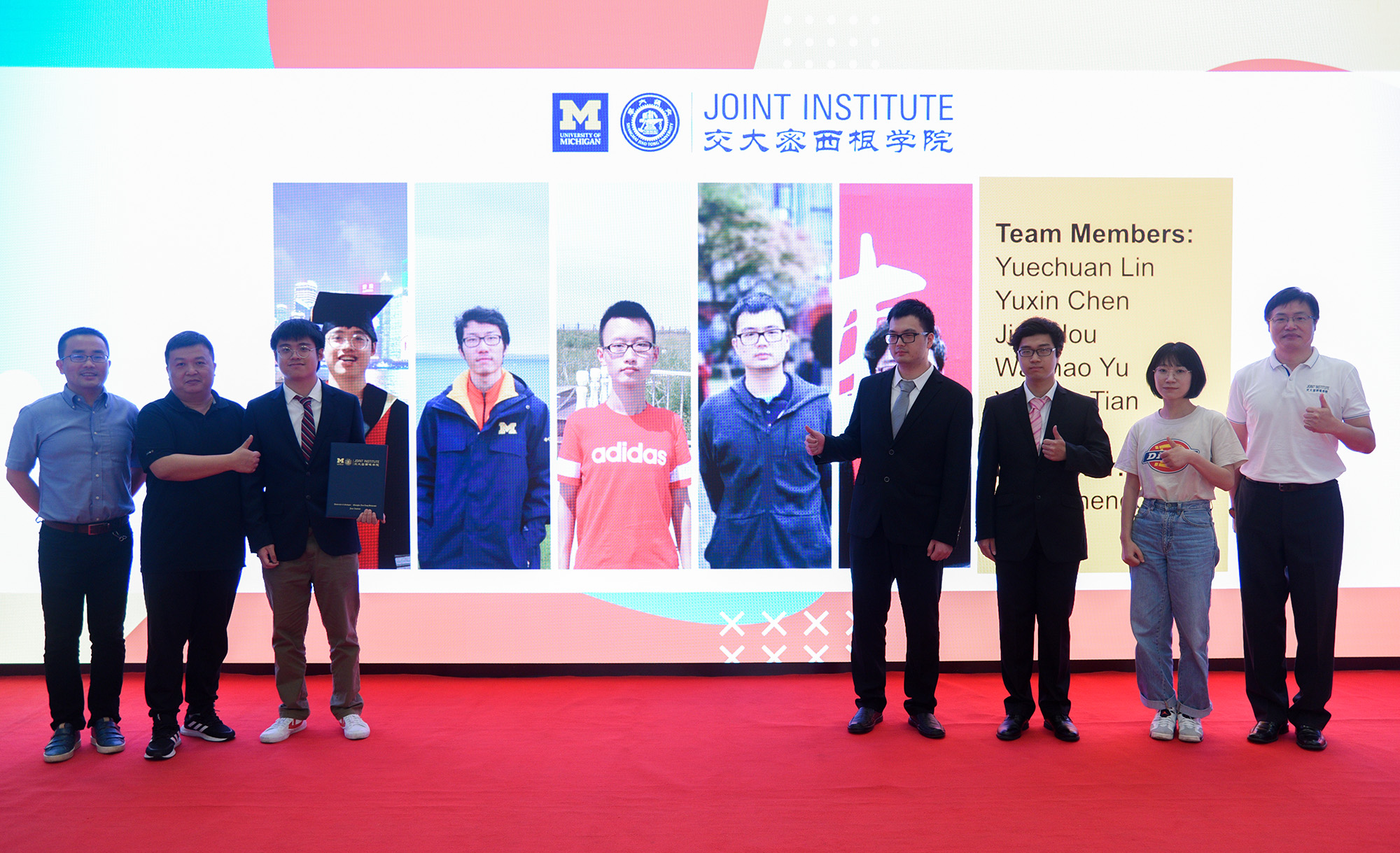 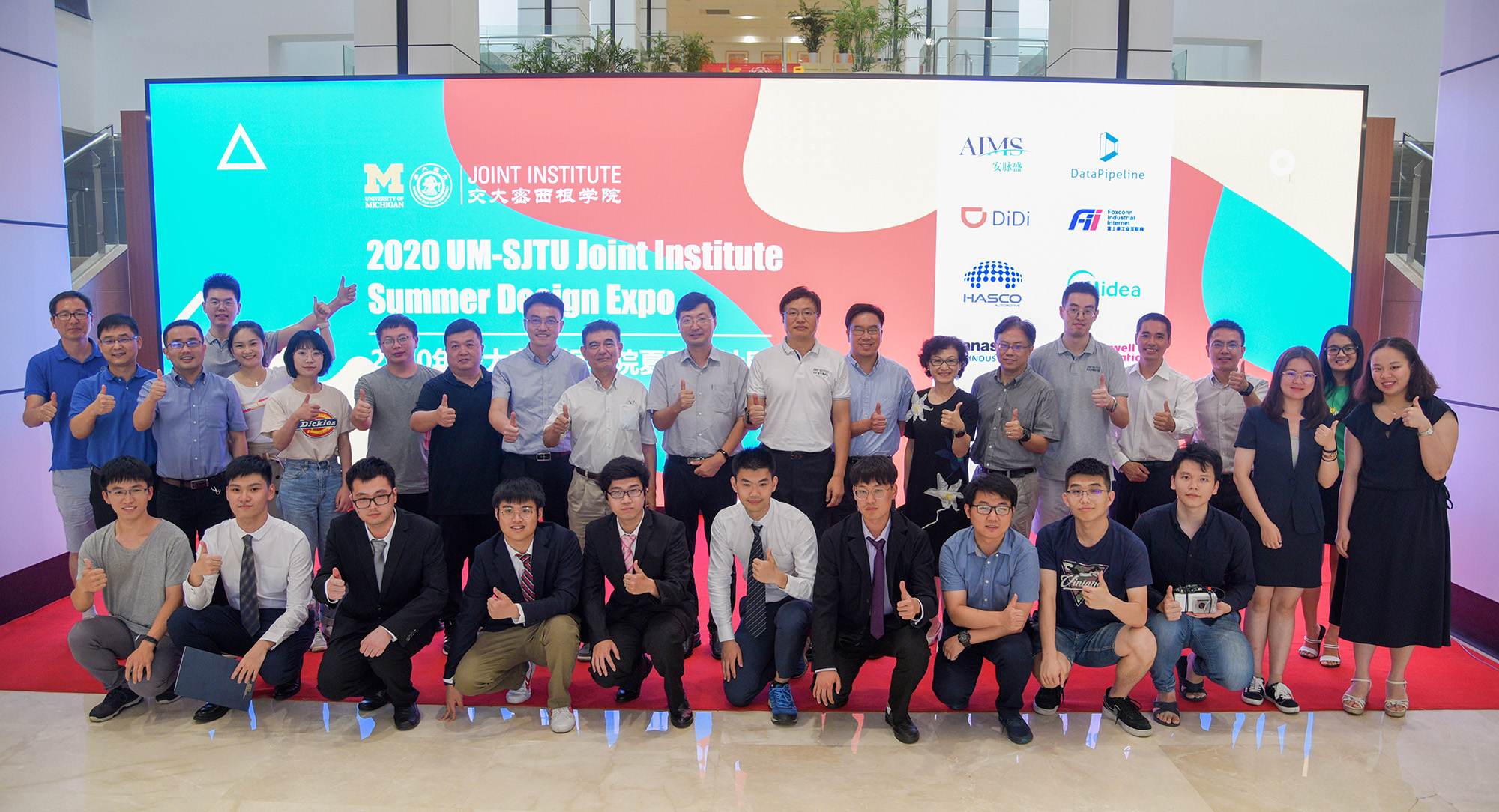 Control of Virtual and Real Manufacturing Systems via AR/VR techniques