Synthesis anti-PT symmetry system can be realized in a single optical microcavity, according to an article published by Professor Wenjie Wan’s research team at the University of Michigan – Shanghai Jiao Tong University Joint Institute (UM-SJTU JI). The article entitled ”synthetic anti-PT symmetry in a single microcavity” with latest research results in the field of non-Hermite quantum optical systems was published recently  in Physical Review Letters, a prestigious journal in the field of physics. Wenjie Wan and the New York City University Assistant Professor Li Ge are the corresponding authors of the paper. JI doctoral student Fangxing Zhang is the first author.

In recent years, non-Hermite systems based on parity time (PT) symmetry and anti-PT symmetry reveal abundant physical phenomena outside traditional Hermite system. So far, the implementation of the above symmetric system is limited to the space domain, such as the coupled waveguide or microcavity. The research by the JI team theoretically and experimentally demonstrate synthetic anti-PT symmetry in a spectral dimension induced by nonlinear Brillouin scattering in a single optical microcavity, where Brillouin Scattering induced transparency or absorption in two spectral resonances provides the optical gain and loss to observe a phase transition between two symmetry regimes. The scheme provides a new method to study non Hermite physics for all-optical signal processing and quantum information science.

The results showed that two coupled optical modes in a single microcavity can be used to replace the current system with spatially arrangement of effective optical potential. Furthermore, the anti-PT symmetry in this synthetic spectral dimension system is proved theoretically and experimentally. Different from the previous researches on the symmetry of the original PT and the anti-PT, the research team coupled two spectral separation resonances in a single microcavity through the nonlinear frequency conversion of stimulated Brillouin scattering (SBS), and did not need a second microcavity. These two nonlinear coupled resonances interact to produce Brillouin scattering induced transparency (BSIT) or absorption (BSIA), similar to the corresponding resonances in atomic physics. Using detuning techniques developed specifically for this framework, the researchers observed a striking non-Hermitian phase transition at a particular point. The related results extend the range of non-Hermitian photonics to the synthetic spectral dimension, and provide a new example for using the advantages of Pt and anti Pt symmetry. 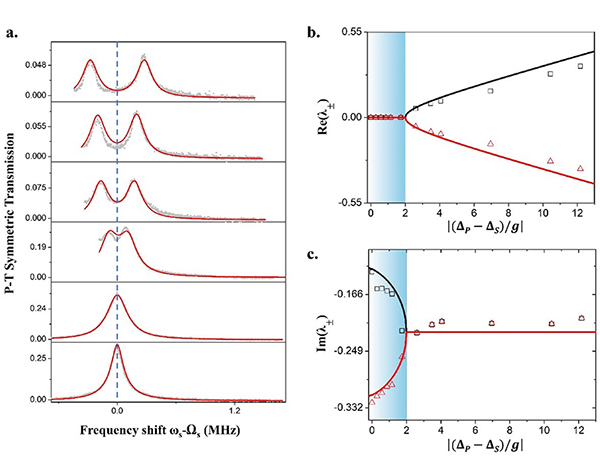 (a) The spectrum of model evolution observed in the experiment (grey point) and its corresponding theoretical results (red line). The eigenvalues of the real part (b) and the imaginary part (c) of the Hamiltonian of the anti Pt symmetric system are measured.

This research provides a new platform for the combination of synthetic dimension and non-Hermitian system, and a unique perspective for the relationship between non-Hermitian physics and nonlinear optical processes. The relevant achievements will be of great significance to the scientific research on a wide range of phenomena including second harmonic generation, parametric amplification and four wave mixing.