Fast transit system is a class of systems with vast engineering applications, such as vacuum tube transportation (Hyperloop), maglev trains, cable transportation and weapon systems (railgun). Those applications share two common features: (1) subsystems (vehicles, cargos, or projectiles) conveyed by the supporting structure are moving at relatively high speeds; (2) subsystems are likely to move in a sequence and with certain patterns. Under the circumstances, unexpected vibration of the supporting structure with large and ever-increasing amplitude can be induced by the moving subsystems, causing instability issue and extreme stresses. Therefore, a systematic dynamic model of coupled rigid-flexible systems with accurate and efficient solution method becomes essentially important for this type of applications.

A semi-analytical method was proposed to give a systematic modeling for the coupled system. Instead of using finite element formulation, the coupled system is discretized via generalized assumed-mode method. It takes the analytical eigenfunctions of the structure as comparison functions to achieve good convergence and accuracy in solution. Another issue in the time-variant rigid-flexible systems is the inconsistent system dimension due to time-varying number of subsystems being coupled to the structure. To resolve this issue, an extended solution domain method (ESDM) was proposed by the author. It defines extended virtual solution domains in addition to the original structure domain so that all subsystems are always inside the extended domain and coupled to an “extended” structure. With the above two methods, transient response of the coupled system can be solved via numerical integration scheme.

Besides the transient response, system stability is also of great interest. To predict the stability and parametric resonance of the coupled time-variant system, a new form of governing equation based on sequential state equations was developed and a novel solution method was proposed by the author. By representing the system response with time-domain mapping matrix, an analytical stability criterion was established by the author for the coupled rigid-flexible system. Stability of the supporting structure excited by periodically passing subsystems is easily determined by comparing the spectral radius of the mapping matrix to unity. The proposed method is capable of handling flexible coupling between the supporting structure and moving subsystems which is not available in the literature for the parametric resonance of a supporting structure conveying moving subsystems.

The semi-analytical modeling and time-domain mapping solution in combination provides a systematic framework of modeling and dynamics analysis for fast transit systems. It allows people to perform not only dynamics analysis, but also stability prediction, parameter optimization, and vibration suppression/control for the coupled fast transit systems. 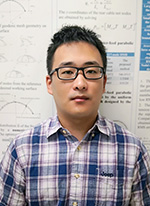 Dr. Hao Gao worked in the Dynamic Systems Lab (DSL) with Prof. Bingen Yang at University of Southern California and obtained his Ph. D. at 2019. After that, he joined the Virgin Hyperloop as a Dynamic Engineer in the System Loads Analysis Method (SLAM) team and engaged in the development of integrated vehicle model and dynamics analysis for the Hyperloop project.

With years of experience in dynamics and vibration analysis, his research interest is focused on modeling and dynamics analysis of distributed parameter systems, including rapid transit system, fast shooting weaponry, deployable structures and complex/periodic structures. He has developed a systematic method to model coupled rigid-flexible system with time-variant couplings. The proposed model and method allow people to perform dynamics analysis on time-variant coupled rigid-flexible systems and predict parametric resonance caused by the moving bodies.