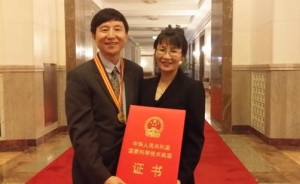 JI’s Dean Jun Ni has won the 2013 International Science and Technology Cooperation Award granted by CPC Central Committee and the State Council. This is the highest honor given to foreigners by the Chinese government in the field of science and technology.
2013 Science and Technology Award Ceremony was held in Beijing on January 10, 2014, attended by 323 awardees. Dean Ni is one of the two winners of People’s Republic International Science and Technology Cooperation Award from Shanghai. Dean Ni and his wife were invited and recognized by Chinese government leaders for this great honor.
Winning the award that is the fruit of his 20-year labor in Sino-American collaboration, Dean Ni felt honored and thankful. He expects to contribute more in the area of manufacturing collaboration.
Dean Ni started returning to China in 1994. Since then, he has traveled almost monthly between the US and China. He uses his expertise and knowledge to help improve engineering education in China and to advise the Chinese government, industry and academia in the development of cutting-edge manufacturing.
For more than 10 years, Dean Ni has helped establish a collaborative partnership between the University of Michigan and Shanghai Jiao Tong University, which has greatly benefited both universities in student exchanges and joint research. The most extraordinary outcome of this partnership is the UM-SJTU Joint Institute which, with her success in engineering global minds of future leaders, has been recognized by the Chinese Ministry of Education as the model of international education collaboration in China.
Dean Ni remarked, “I view myself as an ambassador between China and the US in engineering education and scientific research.”  That is the major reason for his winning the prestigious award.
To reward the citizens and organizations who have made extraordinary contribution to the advancement of science and technology in China, the Chinese State Council has established five categories of Science and Technology award：

to be bestowed annually by the Party Chairman and the State Council.
Read more:
China Daily