The results of 2013 Mathematical Contest in Modeling (MCM) were announced recently. This year, 5636 teams from 14 countries participated, including JI’s record-breaking 24 teams, among which two teams won the first prizes and nine teams won the second prizes. This is the first time JI has won so many prizes. The two first-prize winning teams are the team composed of Zhichao Zhang, Jianfan Yang, Lifan Gong and the team with Cheng Jiang, Yunzheng Wang, Tian Qin. 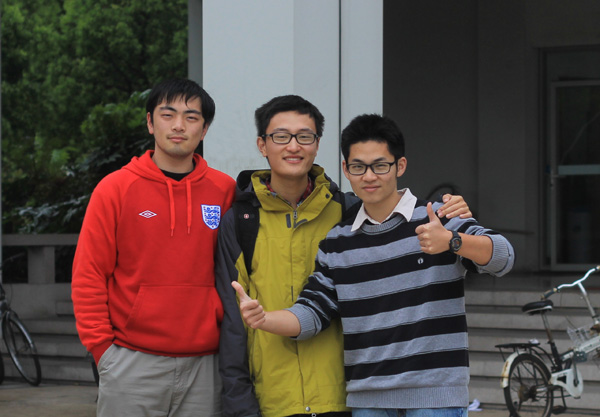 There are two categories of the competition: Mathematical Contest in Modeling (MCM) and Interdisciplinary Contest in Modeling (ICM). The competition emphasizes research of the problems, creativity of the solutions, team work, and rationality of the results. Each team consists of three undergraduate students, who would select a problem and solve it in four days. They would build a mathematical model and write a paper about the problem, hypothesis, mathematical model construction, software, testing, improvement, strengths and weaknesses of the model, as well as the application of the model. The judges who are specialists would select and reward the best papers. The only rule of the competition is no discussion with any outsiders, including teachers. The students can use any books and materials, go on the internet, and use any software. They are encouraged to be as creative as possible.

The two problems of this year’s contest are: A. The Ultimate Brownie Pan; B. Water, Water, Everywhere. Both JI’s first-prize winning teams chose problem A. Zhichao Zhang, the leader of one of the teams, remarked “The seamless cooperation of our team members is the key to our success. Lifan Gong is the vice president of JI’s Innovation Club and good at programming so he was responsible for writing the codes; Jianfan Yang and I worked on collecting data, analysis, and writing the paper. A team needs to achieve the effect of1+1+1>3.” He also pointed out that JI students have a competitive edge of being proficient in using Latex, software for writing scientific papers, which helped them produce a crisp and professional paper that scored high.

MCM is a multi-day mathematics competition for international college students held every February in USA. It was started in 1985 by the Consortium for Mathematics and Its Applications (COMAP) and sponsored by the National Science Academy (NSA), the Society for Industrial and Applied Mathematics (SIAM), and the Institute for Operations Research and the Management Sciences (INFORMS). It is the only international mathematical modeling contest of its kind and has been regarded as the Olympic Game of mathematical modeling.