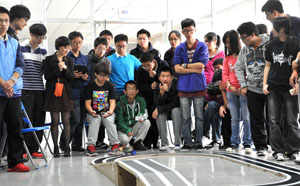 Twenty JI freshman teams competed in the fall Smart Car Contest held at the JI lab on October 30. The popular event was officiated by JI’s Executive Dean and instructor Peisen Huang and attended by many cheering parents.

The Smart Car Contest is the classic project and the first major assignment of Vg 100, JI’s flagship freshman course. Following the requirements, teams of 5 to 6 students are responsible for the whole process, from design, selecting and purchasing material, assembling the car, writing code, test run, and the final product. Students have to use their knowledge of mechanics, microcontroller, and programming to collaborate on the car design and production process. 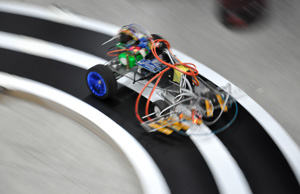 a car in race

The contest was carried on two sections of track: on the first 17.5 m, the average speed cannot be slower than 0.4 m/sec. The second challenging track consisted of 3 sections, including an S curve, a right angle turn, and a changing lane, each counted for 10 points. For freshmen with no experience of model manufacturing or competition, to accomplish the task in 2 months is very challenging. Many students admitted that they were very nervous in the beginning, but after two months of trial and research, they felt they have achieved a great deal.

Through 3 rounds of fierce competition, Team Twister’s car won the contest after leading all the way with impeccable execution. Team 15 won the prize of ‘best design’ with its unique way of turning and stable design. 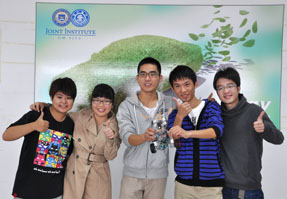 After the contest, many students remarked that during the process of learning, manufacturing, and modification, they have learned not only the knowledge but also the capability of problem solving as well as team work. Many parents commented that they are happy with JI’s teaching model. The students have learned tremendously regardless of winning or not. They are deeply proud of their children.