【Featured Student】Rui Silva – a Portuguese boy and his "Chinese Dream”

Rui Silva, a native Portuguese, is studying Electrical and Computer Engineering at the University of Michigan-Shanghai Jiao Tong University Joint Institute (UM-SJTU JI) for the third year and is a winner of the SJTU Scholarship for Outstanding Foreign Students in 2016.

“Choosing where to go to college can be one of the most exciting moments in one’s life. I couldn’t have made a better decision than selecting JI. It has allowed me to set up higher ambitions for myself.” 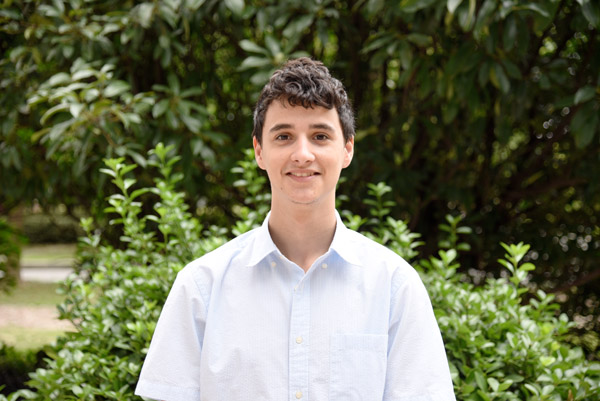 From the distant Iberian Peninsula to the Far East, what attracted this sunny boy from Portugal to choose China as a springboard for his engineering path, and what makes him fall in love with China and try to achieve his “Chinese dream?”

From Europe, but in Love with the Chinese Culture

In 2014, Rui Silva moved with his parents from Europe to live in Shanghai. Coming from an European/Latino culture, Shanghai gave him a taste of the Eastern flavor he had never experienced before, everything around him was so novel and exciting. Prior to this, Silva had been awaiting the chance to fulfill his dream of attending a prestige engineering university. While living in Germany, Silva had been self-learning German in order to attend the Aachen University of Technology. However, when he arrived in China, he found that, compared to the mature European industry, China’s engineering has unprecedented prospects and development potential. “Although we moved to Shanghai when I was about to enter college, I still had my parents’ support to apply for any university around the world.” Determined to be an engineer, among numerous universities he chose JI, which not only offers his favorite engineering but also intrigues him with its international academic atmosphere. 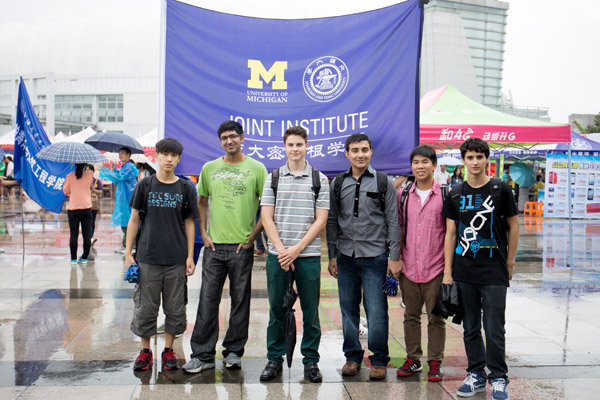 Like many other students, Rui Silva arrived in China without knowing a Chinese word, yet now he has smoothly integrated to the Chinese community. Due to his parents’ job assignments to different regions, Silva has attended many schools in Europe. “Even though it is complicated and unfortunate to leave all the cultures and friends behind, I’ve always managed to make myself easily adapted to new environments. This allowed me to make friends from all over Europe whom I keep daily contact with.” Thanks to such a multi-cultural experience, he quickly adapted to the life at JI.

For Rui Silva, JI is like a big international family where he can communicate with students from different countries. This is Silva’s third year in China. With JI’s intensive learning environment and rich extracurricular activities he lives a fulfilled life every day. In order to help international students enter JI and adapt more quickly, JI started a Buddy Program, which helps foreign students learn and live in a new environment, get familiar with the campus and learn about the local culture by assigning a local peer to a new international student. This kind of peer experience has a far-reaching impact on Silva and he hopes more foreign students can feel warm and cared for in China. To this end, he once organized a long-distance bus tour, taking more than 50 students from Germany, the United States, France and other countries to downtown Shanghai. He showed the newly arrived students the attractions of Shanghai and its colorful culture.

With his hard work, Rui Silva reaped a bumper crop. At last year’s SJTU Outstanding Student Award Ceremony, he won the “Outstanding International Student Scholarship” and received the award on behalf of international students, which will be etched forever in his memory. Winning this honor is not only the best reward for his past endeavor, but also affirms that his choice was right.

Besides studying, Rui Silva’s interests are quite extensive. Coming from a country famous for great soccer stars, he is a zealous soccer fan. Since the age of four, he has joined several professional academy soccer teams in Portugal, having captained and won most championships and cups. The rigorous training of Portuguese professional youth camps has built a solid foundation for Rui Silva’s soccer skills.

It was no surprise that as soon as Silva set foot at JI, he joined the JI soccer team to channel his passion and showcase his talents. In the eyes of the team captain, he not only is the most skillful but is also very responsible, often helping with training. In addition, Silva helped design JI team’s uniform. Under his influence, the team members rooted for each other and forged ahead in unity. They won the third place at the SJTU “Hope Cup.”

Rui Silva is sportive and sociable; on the other hand, he can also focus on studying by himself. He says that he is particularly interested in reading global news online in order to update his knowledge and broaden his horizons. Constantly learning and exploring new things seems to be his second nature. Because of his thirst for things unknown, in addition to soccer, he started trying software programming from the age of 10. In high school, he tried to develop video games and software. His hobby came in handy in taking programming courses at JI. That is why in the sophomore year he did not hesitate to choose the electrical and computer engineering as his major.

“In the future, I want to work in China”

JI offers a wide variety of humanities courses which set high standards on literature research, analysis and summary. Rui Silva takes this seriously. In his view, the integration and summary of the data not only demonstrates one’s writing skills, but also reflects the individual’s analytic approach to problem solving. “This requires us to have the passion to keep exploring the various possible details, so as to obtain a methodology for investigative research. Sorting and extracting information effectively foster my logical and mastery thinking capability. ”

Rui Silva with the team at the Philips Lumileds

In fact, Rui Silva’s enthusiasm and rigor in analyzing information greatly benefits his internship. In January last year, he successfully secured an intern position at the Philips LUMILEDS. As an electrical engineer, he needed to deal with every electrical prototype and module testing in Shanghai. Assisted by his mentor working from Malaysia, Rui Silva’s years of experience in data processing and research ability allowed him to fulfill his position and lead the team to better and more reliable data. He could sum up the characteristics, the individual analysis of each model and thus play a guiding role in his team.

Silva’s success in the team was greatly acknowledged by his former Senior Electrical Designer mentor: “I will always be proud to have Rui work alongside with me”, adding that “He lives up to Lumileds Spirit – “taking ownership” and “team up to excel””. His mentor believes that with “proper guidance and experience gain”, Silva can “surely become a successful electrical designer in the future”. 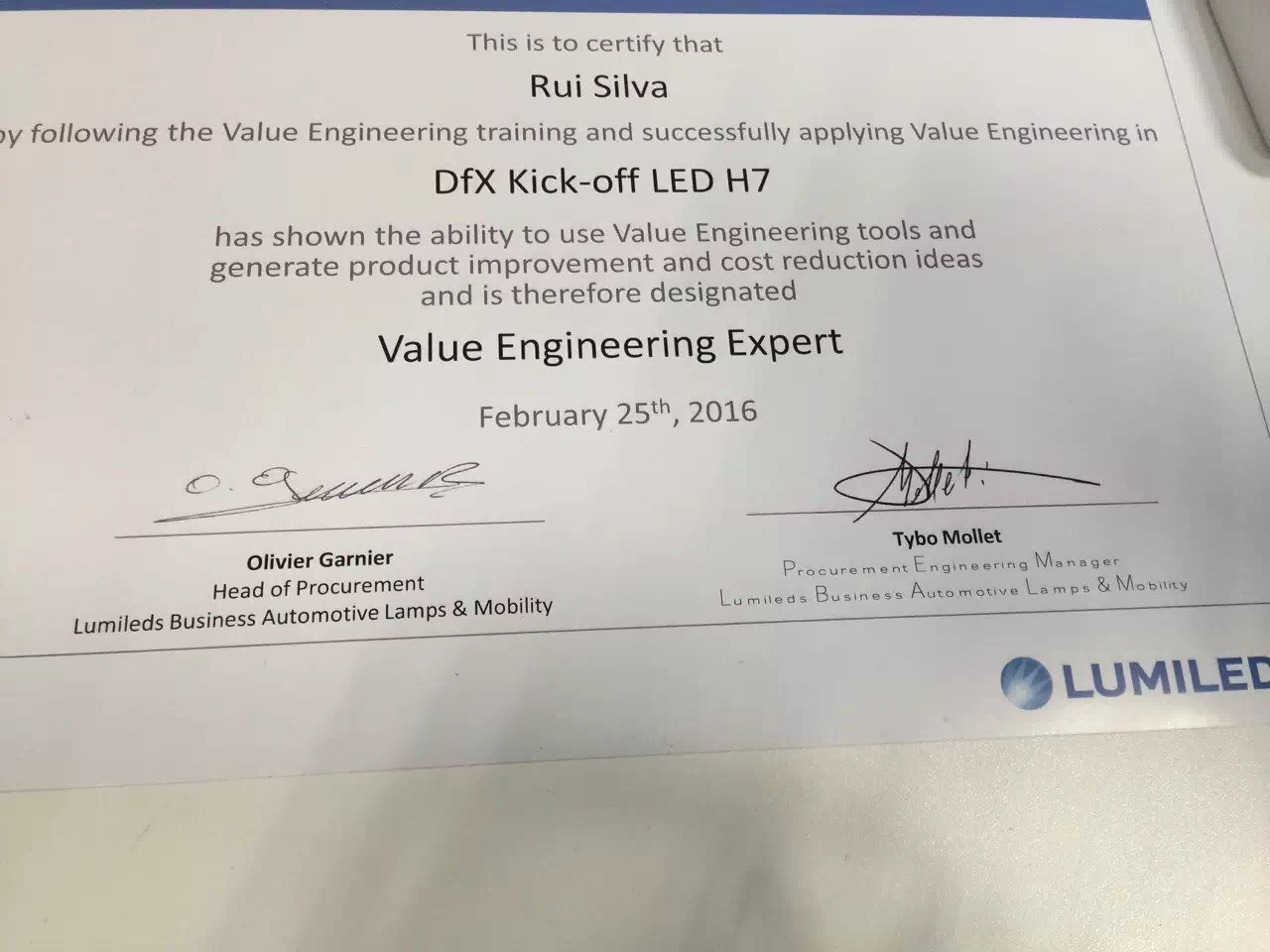 In order to further prepare for his future career development, this year Rui Silva took another internship as Software Engineer in PHILIPS Lumileds. The solid skills he had learned at JI let him quickly become a core member of the team responsible for the FE/BE Software Architecture duties, dealing mostly with the Industrial Front End Design GUI Infrastructure and Back End Design and Database Framework. Rui Silva’s strong curiosity and quick learning ability greatly impressed his mentor, Roger Yu, who remarked: “I was surprised that he would be able to build a perfect graphical user interface system from scratch within half a month of starting his internship. He already started to know how to make an idea to a real product and make the product robust. Although he is only a college student, he is not inferior to other experienced software developers.”

For Rui Silva, being able to apply the engineering knowledge learned at JI to practical professional work is the one of the greatest achievement of his internship. Learning and working in China makes him consider the possibility of pursuing his engineering career here. With the rapid development of China’s industry 4.0, he foresees the great potential for an engineer to develop a career in China. In the future, he intends to go on graduate study as soon as he establishes a solid professional base.

To the new students who are about to enter JI, Rui Silva encourages them to explore their potentials. “Challenge yourself by joining several activities and expand your interests. Interact with the lecturers as they are always willing to help the students with any questions or even just getting to know each other.” “Take the time and find what you truly want to pursue based on your interests and academic talent. But most important of all, have fun and enjoy the time you will be spending at JI!”