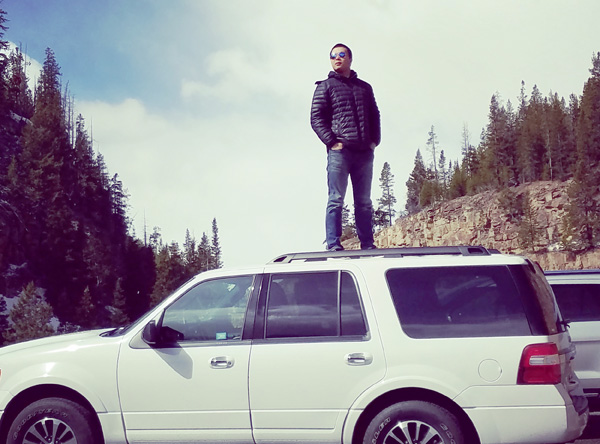 “Since my goal is the horizon, I shall move forward without looking back; since my choice is in the distance, I shall forge ahead rain or shine.”

During Xieyang Liu’s four years at JI, both on SJTU’s Minhang campus and University of Michigan’s Ann Arbor campus, like many of his JI classmates, he has repeatedly experienced the mixed feelings of confusion, uncertainty, excitement and joy. In retrospective, Liu thinks the most important thing he has learned from JI is not burning the midnight oil to keep up with JI’s rigorous curriculum, but the thirst for knowledge, perseverance and the calmness when facing glory or setback. In his eyes, these are the most precious medals he has earned.

Never be satisfied. The interest is the best teacher.

“An iPod. A phone. And an Internet communicator.”

“Are you getting it?”

Ten years after the launch of the iPhone 1, the excitement at the unveiling ceremony is still fresh in Liu’s memory. At that time, he was flabbergasted by how Steve Jobs had led his Apple team to transform a personal computer into a palm-sized phone while maintaining an unparalleled fluency and user friendliness. Liu was curious about what drove the perfect fusion of software and hardware, what made a tiny screen showing a rich variety of interfaces and what infused the same application with ever-changing vitality. The seeds of knowledge were buried into the heart of Xieyang Liu at that moment. Since then, the seeds have sprouted and flourished as his interest in computer science grows, which led him to major in electronics and computer engineering at JI and UM, learning the most advanced and exciting knowledge and skills in the field.

Xieyang Liu (second from left) and his JI team mates, winning as one of the six national finalists in the “TiC100 Smart City and the Internet of Things Innovation and Entrepreneurship Competition”

After three years of undergraduate study, Liu was no longer just a curious iPhone fan. Having taken a large number of courses and research projects, he had gradually mastered knowledge in computer programming and computer structure based on a solid foundation. With the continuous accumulation of professional knowledge, his major of the computer science has become a melting pot of operating system, computer architecture, large data, cloud computing, distributed systems, network communications and security, machine learning, etc. At this time, Liu realized that his energy was limited, so he could not concentrate on multiple areas at the same time.

In order to delve into the forefront knowledge of computer science, Liu faced a difficult choice for the “best” concentration. However, after a period of pondering, he realized that there was neither a good nor a bad area. To succeed in a particular concentration really depends on a persistent interest. Therefore, he took advantage of the curricula and research projects at UM to sample various areas, including computer vision, machine learning, human-computer interaction, network security and others, hoping to pinpoint his real interest.

With the ongoing trials on scientific research, Liu has also deepened his understanding of the computer. For him, a computer is no longer a cold machine but a window for people to interact with the world. It is a tool to help people improve work efficiency and a key to the door of the wisdom. No matter how the computer develops, he is most eager to make the computer serve the human beings better. Finally, Liu chose human-computer interaction as the direction of his doctoral study, because he believes that, with his efforts, everyone can be better by using a computer.

The pursuit of excellence will achieve success unexpectedly 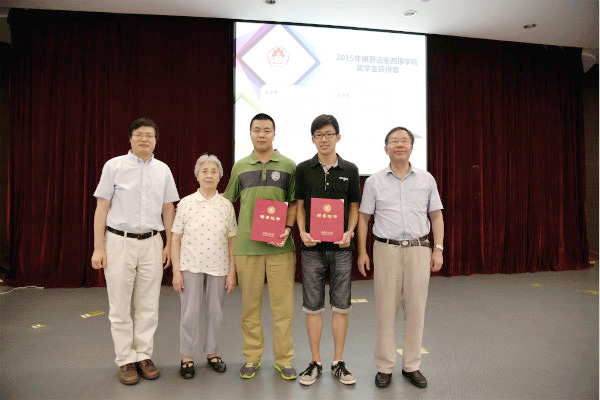 Since entering such a top university as SJTU, especially JI where it is teems with “capable people,” Liu has found that everyone is competing to be a winner, rushing to try a variety of things and accumulate various experiences. However, after jumping on the bandwagon for a while, Liu found that it was not what he had wanted. He thought that for most people, the struggling, be it sincere or just following the crowd, would only add a few lines on the resume. In his view, an act without sincerity is a waste of time. Everything he wants to do should be meaningful and would leave something for the environment.

In his junior year, Liu worked as a teaching assistant for Dr. Jing Liu’s advanced math class. For someone who had never stood on the podium, to give a 1.5-hour recitation and exercises was unthinkable, but Liu was determined to give it a shot. He remembers during the week before his first class, he was in the state of insomnia, going to classes during the day and thinking of every word to say at night, which he wrote down on the paper along with the answer to each exercise question. He would rehearse and modify repeatedly. From the first class of fewer than 40 students to the last class with more than 150 students, he had personally compiled the class notes of the entire semester, used up more than 100 chalks, graded at least a thousand copies of homework and exams and presided over 80 hours of Q & A sessions, all for the pursuit of perfection.

Liu’s successful TA’s stint at JI emboldened him to continue as a TA at the UM. It was a huge challenge to assure teaching quality as a foreigner speaking English. As a seasoned student, he deeply understands that an instructor’s accent makes a big difference in teaching effectiveness, so his first hurdle was the language barrier. Liu demanded himself not only to teach in accurate English but also to reflect his understanding of American culture. Through well-prepared lesson plan, cracking jokes at warm-up and connecting class material with real life, he was rated an excellent TA at the end-of-semester evaluation.

Looking back, the TA’s experience brought Xieyang Liu unexpected rewards. Not only has he become more outgoing, thinks more sharply and speaks English more fluently, but also can he face obstacles with strong will and handle daily living with serenity. Summing up the experience, he believes that what ultimately counts is often not a thorough plan in the beginning, but rather the process. With the pursuit of excellence in mind to do everything, one will gain far more than imagined, which is the real meaning of trying new things constantly.

Love life and embrace all possibilities of life 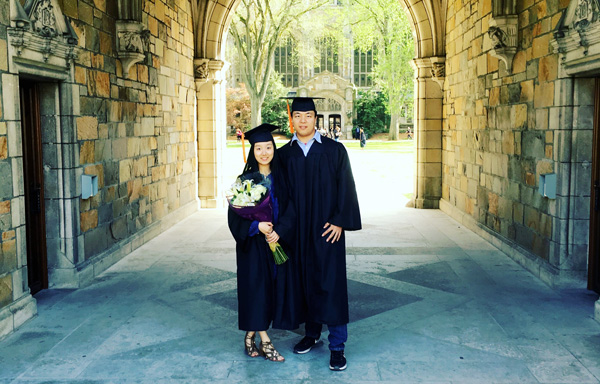 Xieyang Liu and his girlfriend at the UM

“I don’t care if the road ahead is smooth or rocky; as long as there is a passion for life, everything will be all right. ” — Wang Guozhen

Life is like a game of chess. To win, one needs not only a fine plan and comprehensive overview, but also the courage to take risks and the adaptability to trying situations.

On the second semester at JI, when every classmate was scrambling to find internship opportunities, Liu was no exception. After being turned down repeatedly, he began to calm down and consider whether employment after graduation was suitable for him. It was such a step-back decision that let him explore his own direction, which eventually led him to scientific research.

Before applying for a doctoral program, Liu’s seniors and lab members suggested to him: “You only need to apply to UM, then our adviser will certainly take you.” He could have just submitted a decent application to the UM and solved the problem after graduation once and for all, without the trouble of having to modify application materials over and over again, to find people to make suggestions and to contact professors at various school to promote himself. However, the uninhibited drive in him pushed him to try the different possibilities of life, urging him to find the most appropriate adviser and laboratory. After submitting the application to 11 graduate schools, he received admission and full scholarships from seven doctoral programs, including that of Harvard University. He finally chose Carnegie Mellon University, the mecca of countless aspiring computer scientists.

Coming a long way, Xieyang Liu would like to thank his girlfriend, parents and advisors for their support and encouragement so that he finally found the anchor in the vast academic ocean to fulfill his dream. For Liu, the significance of his four years at JI is not his various awards and achievements, but the discovery of his ideal of life through actions and his unwavering interest and his pursuit of excellence that overcomes every challenge so far. He has walked every step with assurance and self-confidence, which allows him to pursue further visions and ambition. Looking into the future, he hopes that he can adhere to this motto of life and constantly reach toward his dreams. Whether the future is smooth or rocky, his passion for life will keep him going.