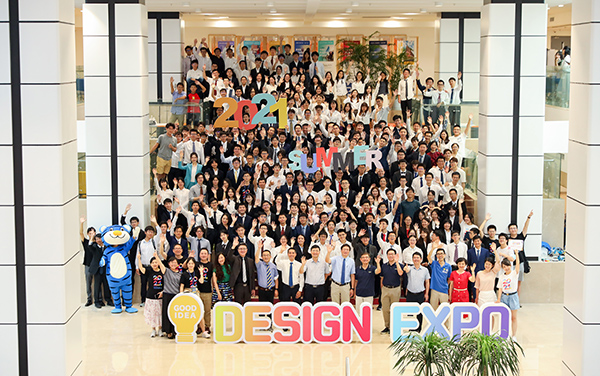 A mobile phone app to find your car in a large parking lot? A robot to deal with aliens on the Mars? Seeing the food in the fridge without opening the door? The University of Michigan- Shanghai Jiao Tong University Joint Institute (UM-SJTU JI，JI hereafter) students have solutions for all these problems, as you can find them on display at the JI 2021 Summer Design Expo held on August 4. More than 80 innovative student projects were displayed on the show. The design projects are from a number of experimental courses of the summer semester across all grades such as “Introduction to Engineering, ”Design and Manufacturing 3,”“System Design and Implementation”. The semi-annual design expo is an all-round display of JI students’ innovative achievements.

With the development of science and technology, it can be foreseen that in the future, immigrating to other planets won’t be just a “pie in the sky” talk. The Mars, which shares similarities in composition, inclination, and even the presence of water on its surfaces with the Earth, is definitely an ideal destination for human immigration and interstellar travel. However, before human landing, there remains concerns that if there already exists aborigines or aliens on Mars, we humans need to make harmonic relationship with them and also learn to protect ourselves. A freshman project team designed a diplomatic Mars rover for such a purpose. The diplomatic Mars rover can implement three functions: identification, greeting and self-protection. When tracking specific routes along a lake bank, the rover checks whether there are aborigines living along the bank. It can tell whether the creature it meets is bona fide or malicious by detecting laser. When the rover finds that the alien displays no harm, it will try its best to build a harmonious relationship with the aliens in three ways. Beautiful music will automatically play to spread the Earth culture to aliens. A team flag will rise to demonstrate the rover’s identity. A smiling face will be displayed on the rover to show its friendliness. However, when the rover detects laser and finds that the alien has an intention of attacking, it will return to the space capsule quickly to protect itself. On its way back home, a white flag will rise to call a truce. In this way, the rover successfully carries out the diplomatic mission.

With the gradual rise of unmanned photography technology, more and more outdoor large-scale events use UAV photography technology to provide different shooting angles. However, indoor large-scale events do not have appropriate aerial photography equipment, and cameras installed in advance can only be shot from a specific angle. Ordinary airships are either too large to be used indoors, or too small to have an independent propulsion system. Also, drones have the disadvantages of limited battery life, loud noise and safety risks if they shoot indoors. A JI freshman team therefore built a small airship that can take aerial pictures from indoors and change the angle by flying slowly with thrusters. The indoor picture-taking blimp consists of airbags, a fan propulsion system and cameras. The airbag, which is two meters long and one meter wide, is filled with helium that keeps the ship afloat for hours, ensuring the duration of the shoot. One section of the airbag is attached to a long rope to facilitate recovery of the airship. The propulsion system is placed below the airbag, which consists of a central support and two ducted fans that are symmetrical on both sides. The duct in the fan system can make the fan get better propulsion effect with the same power, and also play a role of protection. The shape of the fan blade is designed according to the principle of aerodynamics to ensure the efficiency of the fan. The large size of the fan allows the fan to provide sufficient thrust at low rotating speed, avoiding the safety issues associated with high-speed fans, and reducing noise and disturbance on the surroundings. The two fans are controlled by independent remote-control switches. The design of symmetrical double fans enables the airship not only to fly smoothly in a straight line, but also to turn left and right freely by turning off one of the double fans. Cameras can be installed anywhere on the ship on demand, and the video can be transmitted in real time via the Internet to devices such as mobile phones, or stored inside the camera. When the airship reaches steady flight, it can output high-definition, continuous and stable images or video synchronously.

When one’s memory disappeared as time went on, can you tell what still remained in your heart? To answer the question, a JI freshman project team designed a game based on a story of two: the player (you), a young musician, who lost most of his memory in an accident, and his deceased lover, Maria. The player’s fate is destined to change when he enters the house he once lived in with his lover. As he switches the floor and checks the furniture in the house carefully, he may find something unusual, like the fragmented pictures, the freshly cooked coffee, the dark-covered second floor, and the locked drawer. These pieces of items enroll the player into a search for deeper secrets. The game combines the story with the puzzle elements in order to enrich the game experience. The player only need a mouse or finger to play the game, which is operable on the pads or mobile phones. 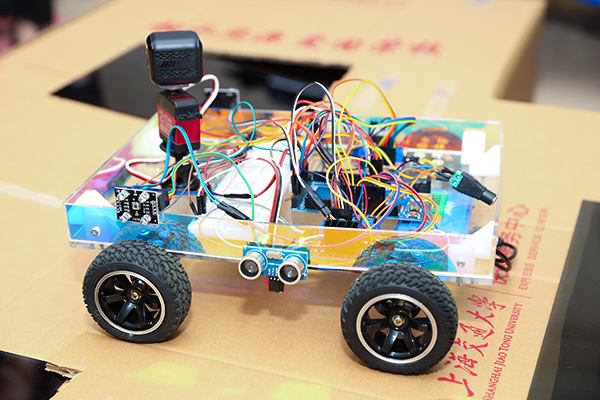 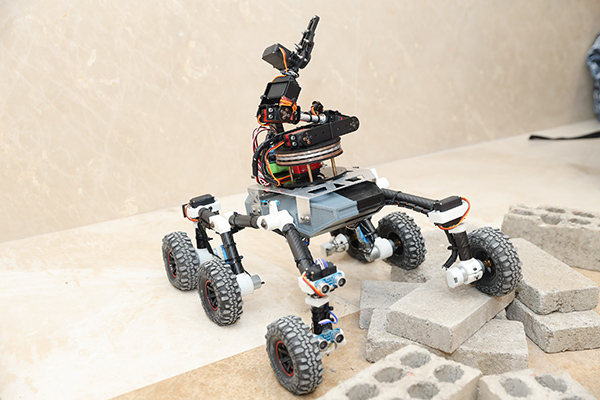 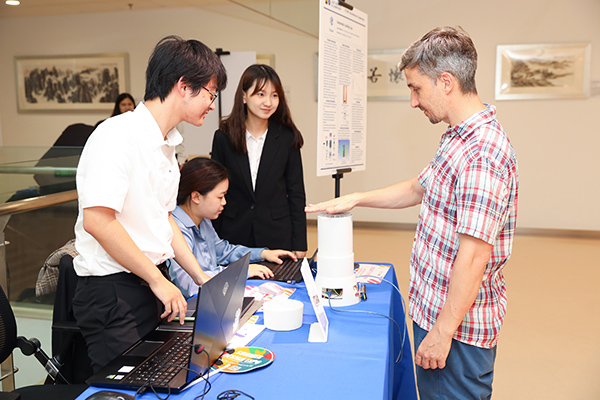 As a JI’s brand course, “Introduction to Engineering” allows students to participate in interesting projects. Students are encouraged to find problems in daily life and use the basic engineering knowledge to solve the problems with innovative thinking. According to Professor Yanfeng Shen, “Introduction to Engineering” is more like a discovering course, where the course focuses more on the students’ “engineering instinct” and lead them to find, ask and solve problems from a scientific and professional perspective. In addition, the course teaches technical writing in English, an essential skill for engineers.

As one of the most important equipment in construction machinery, excavator often works in difficult and dangerous conditions. In the real world, an autonomous excavator has many benefits, such as improving efficiency and reducing injuries caused by inexperienced excavator operators and complex terrain. A JI senior student team developed an excavator system that can move its bucket to a given set of coordinates and avoid obstacles in the path automatically. The system is composed of two parts: perception, motion control & planning. A binocular camera with a servo is mounted on the excavator so that it can perceive the surroundings from multiple angles as a series of point clouds. To control the motion of the robotic arm precisely, the original hydraulic system is utilized to provide enough power to drive the boom and stick. To measure the current orientation of the robotic arm, four orientation sensors are used to measure the related angles. The project stems from actual production environment and takes off burden from excavator operators to perform a safe, efficient and precise operation.Information Fusion of mmWave Radar and Image Sensors

Autonomous driving has been one of the most expected AI applications in real-life scenarios. While the fast development of computer vision and automation technology is making a promising future for autonomous driving, many critical problems remain unsolved. Among these is the problem of fast and robust object detection. While the best-performing object detection models in computer vision community features great accuracy, they generally suffer from high computational complexity and therefore is not efficient enough for real-time running. To that end, a JI senior student team developed an information fusion system of mmWave radar and image sensors to achieve fast and robust object detection. The system including both the building of hardware equipment and the development of software algorithms is tested to be able to consistently detect the objects within real-time under a GPU setting. The hardware is composed of a camera to capture image data, and two milli-wave radars to detect the objects in the environment in the form of point clouds. The point clouds detected will then be mapped to the image plane as the locations of object candidates. The computer vision algorithm will then be applied to compute an exact bounding box around the object and identify what the object is (e.g., person, car, bicycle, etc.).

With the development of the Internet of Things, smart home appliances have been more and more widely used in our lives. From air conditioners and refrigerators to door locks and lights, smart home appliances bring many conveniences to people who lead busy lives. A JI senior student team designed a model based on the BME688 gas sensor provided by Bosch to make the refrigerator smarter. Users only need to open the app on their mobile phones to know what foods are in the refrigerator, what kind of food they are, and how fresh they are. The designed system consists of two parts, a gas sensor and a model. The gas sensor placed in the refrigerator will collect information about the concentration of different kinds of organic gas molecules, environmental information, such as temperature, humidity, etc. The information stored in a SD card will be imported into a designed model on the computer which will output the name, type and freshness of the food. In the future, such a feature will be added to the mobile app to make it easier for users to check the food situation in their refrigerators. 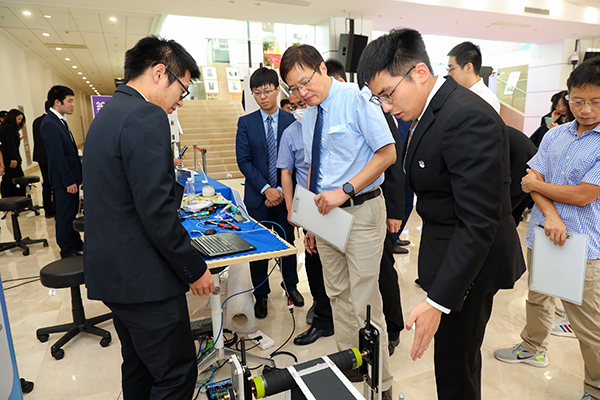 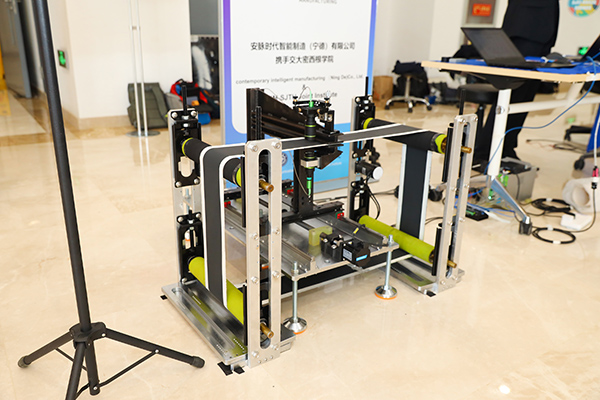 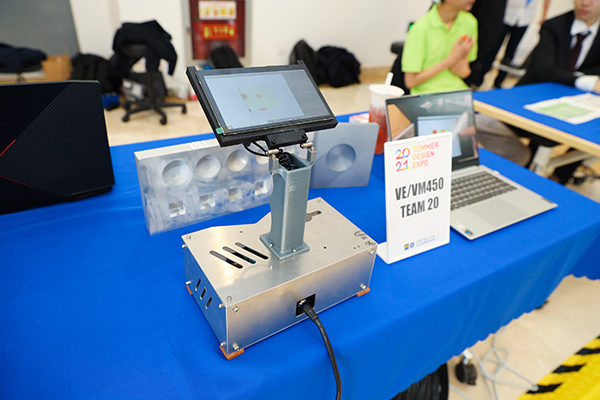 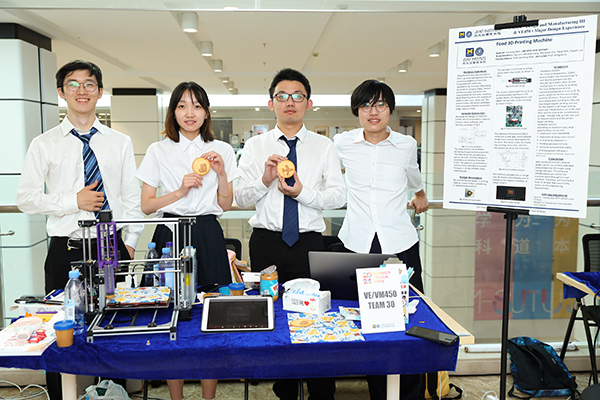 Since the first corporate-sponsorship was launched at JI in 2010, more and more multinational companies have sponsored “custom” projects that follow their market trends. In recent years, the proportion of JI’s corporate-sponsored projects has increased every year and JI students have earned accolades from the sponsors. The corporate-institute partnership creates a win-win outcome. Through the courses, exchanges and other effective means, JI stimulates students’ creative thinking and provides a multichannel and comprehensive platform for talent training and business cooperation. 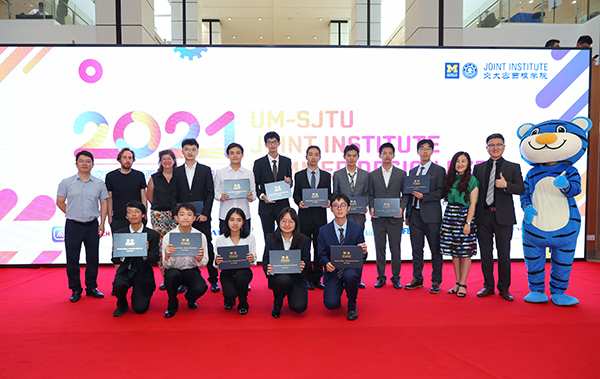 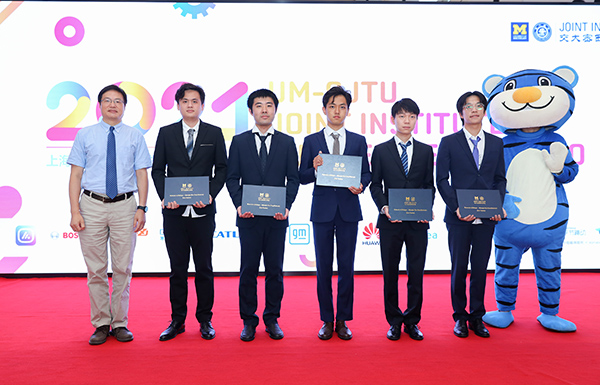