JI Assistant Professor Kai Xu received an award from the 2014 Shanghai Rising-Star, a talent program sponsored by Shanghai Science and Technology Committee, aiming to help young researchers start and develop their research in science and technology. Prof. Xu is the first JI faculty member to win this honor.

Prof. Kai’s proposal is titled “Stiffness regulation of multi-backbone continuum mechanisms under extreme loading conditions.” This project intends to expand the existing design theories of continuum mechanisms to include multi-backbone continuum manipulators based on super-elastic nitinol. Several topological structures will be studied.
The kinematics-statics dual mapping between the distal structure and the proximal actuation will be explored. A stiffness model could be established by using Cosserat theories. Design guidelines could be developed based on a performance evaluation criterion which could be derived from the kinematics and stiffness properties. Based on the stiffness and kinematics models, the study would also try to understand the interaction between such a multi-backbone continuum mechanism with an unstructured environment and the stability of such an interaction. 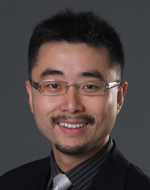 Prof. Xu received his BE (Bachelor of Engineering) and MS (Master of Science) degrees from Tsinghua University, China, and PhD degree with distinction from Columbia University, USA. He won the Presidential Distinguished Fellowship, Columbia’s highest fellowship, in 2004 and the Chinese Government Award for Outstanding Self-financed Students Abroad in 2008. Prof. Xu was listed in Marquis Who’s Who in America 2011. He was also granted by the Program of New Century Excellent Talents in University (NCET Program) from the Chinese Ministry of Education in 2009 and the Pujiang Scholar Program from the Shanghai Municipal Government in 2011.
Prof. Xu has been intensely engaged in developing the state-of-the-art surgical robots, including a tele-operative surgical robot for laryngeal MIS at Johns Hopkins University and the IREP robot for SPA laparoscopy at Columbia University. Since joining UM-SJTU JI, he has continued to develop less invasive surgical robots for NOTES and SPL (Single Port Laparoscopy) applications. His research projects have been funded by the University of Michigan, the Global Research Outreach program of SAIT (Samsung Advanced Institute of Technology), and various funding agencies in China.
Prof. Kai Xu webpage: http://rii.sjtu.edu.cn