The final competition of the 2016 Shanghai Jiao Tong University (SJTU) “KoGuan Top Ten Teachers” was held in SJTU Minhang campus on December 18. After the initial presentation and the final re-evaluation, Professor Mian Li won one of the titles with the second most votes.

The re-evaluation was in the form of open class, including a lecture and a round-table discussion. In his lecture, Professor Li presented a talk entitled “‘Net play’ China” in which he began with describing the phenomenon of commercial art houses creating new forms of stage art. Then he explained the application of large data, large data structure and the concept of machine learning, using the ticket pricing system as an example. He gave insights into the future of the large data field.

During the round-table discussions, to the questions of the greatest wealth a teacher can bring to students, Professor Li answered, “First, always love your work; second, keep the curiosity of the work; third, treat people with sincerity.” As to how do coordinate the dual roles as a teacher and a leader at the University of Michigan- SJTU Joint Institute (UM-SJTU JI), Li said, “To work at the Joint Institute, you need passion. My work at JI is my career.” 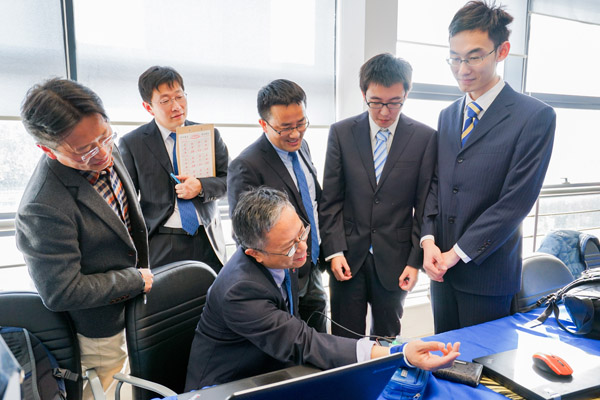 As a teacher at JI for seven and a half years, Professor Li, witnesses JI’s growth and development. As he puts it, he is passionate about his work at JI and considers it his career. In the Design Expo, a major highlight of JI’s achievements in teaching and corporate collaboration, Li is responsible for guiding the capstone design projects. In institute services, Li was a core member of JI’s ABET (Accreditation Board for Engineering and Technology) accreditation task force, actively pushing JI toward achieving the international engineering education certification, making JI one of the first in China and the only one with two disciplines passing the ABET assessment. His contribution to JI’s laboratory and network system construction is also limitless. In addition, Li is enthusiastic in student work: he is a co-instructor of JI’s smart car racing team and he has led JI student volunteers to teach in remote Yunnan villages.

Li and students at the KoGuan Top Ten Teachers re-evaluation

The student-organized “KoGuan Top Ten Teachers “ competitions has been successfully held for six years. Students interview and select the most dedicated and popular SJTU teachers.

Mian Li is a special researcher, associate professor and doctoral adviser at the UM-SJTU Joint Institute. He was admitted to Tsinghua University’s Department of Automation in 1994 and graduated with a master degree in automation in 2001. He then went to study at the University of Maryland where he earned a doctoral degree in mechanical engineering with the award of the Best Doctoral Dissertation in 2007. After graduation, he worked as a postdoctoral associate at the University of Maryland. In September 2009 he returned to Shanghai and joined JI. In July 2010 he was also appointed as Associate Professor at SJTU’s School of Mechanical Engineering. Since March 2012, he has been a special researcher, associate professor and doctoral supervisor at JI. Professor Li’s main research interests are in the design optimization of complex systems, including multidisciplinary optimization, multi-objective optimization, robust design and stability analysis, sensitivity analysis and uncertainty analysis, and simplified models and approximation algorithms. His innovative scientific research has achieved practical application results. At present, his research focuses on the application of advanced design methods, approximate models and optimization methods to interdisciplinary research fields, such as renewable energy systems, electric vehicles, vehicle energy system design optimization, complex intelligent information systems and so on.