Professor Jiajia Luo of the University of Michigan-Shanghai Jiao Tong University was one of the winners of the National Natural Science Foundation of China (NSFC) fund for his  “Biomechanical Analysis of Uterine Suspensory Tissue in Female Pelvic Organ Prolapse” project, according to a recent NSFC announcement of 2018 list of funded projects. Pelvic organ prolapse is an abnormal downward displacement and deformation of the female pelvic organs, mostly due to unintended vaginal birth injuries. Each year, over 200,000 operations are performed for prolapse in the United States, with annual estimated cost for these operations exceeding $1 billion. As the world’s most populous nation, China is projected to face the same problem with the drastic increase of aging population. The reason why vaginal birth results in pelvic organ prolapse over 20 to 30 years or a woman’s life-span remains a millennium-old mystery. Professor Luo’s project will recruit and test asymptomatic volunteers and women with pelvic organ prolapse to measure and quantify uterine suspensory tissue viscoelasticity, and apply those data to patient specific computer models to understand its contribution to the development of pelvic organ prolapse. This research will be helpful in developing strategies for improved prevention and treatment selection and a better understanding of why muscle damage at birth causes prolapse 20 to 30 years later in life.

The study focuses on the three-dimensional (3D) pelvic floor reconstruction, specific structural material properties of patient testing, and patient specific computer biomechanical models and finite element simulation. It is expected to help test multiple clinical hypotheses simultaneously which are not possible in living people and help surgeons to prepare specific treatment strategies and plan surgery. The female pelvic floor anatomy is one of the most complex structures in the human body. It contains multiple reproductive organs, urinary organs, connective tissues, ligaments, and smooth muscles, striated muscles and so on. Its complexity poses a huge challenge for the diagnosis and treatment of pelvic floor diseases. Due to its safety and clear imaging of muscles, magnetic resonance image (MRI) has been widely used in the study of organs such as the heart and brain. The research of female pelvic floor is still at its early stage.

The study aims to build a big data based smart connected system for facilitating real time monitoring and diagnosis to improve women and children’s health, by designing smart sensors and developing novel machine learning algorithm. Women’s pelvic floor disease and children’s heart disease have affected women and children’s health badly. The two diseases are usually hidden problems either because women do not want to share and children do not know what happened, or because they do not know what and how to share.  In addition, those often-delayed diagnosis requires time-consuming examination, such as reviewing the long recordings of urodynamic data or electrocardiogram (ECG). 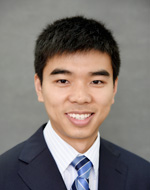 Jiajia Luo is an Assistant Professor at the University of Michigan-Shanghai Jiao Tong University Joint Institute. He received his Ph.D. from the University of Michigan in 2012. His research focuses on applying innovative medical device and patient specific computer modeling to understand the biomechanics of female pelvic floor disorders, and utilizing this information to establish new preventive and clinical treatment strategies to improve women’s health. Meanwhile, Professor Luo is dedicated to the research on big data based smart connected health system, in order to improve the disease monitoring and diagnosis. He was a recipient of Best Scientific Paper Award from the American Urogynecologic Society (2010), Ph.D. Competition Award from the American Society of Mechanical Engineers Summer Bioengineering Conference (2013), as well as a career development award as the Principal Investigator in Michigan Institute for Clinical & Health Research (MICHR) (2014) sponsored by NIH. His work on female pelvic floor biomechanics was highlighted in Journal of Biomechanics (2015).