The University of Michigan-Shanghai Jiao Tong University Joint Institute (UM-SJTU JI, JI hereafter) Assistant Professor Yulian He and Assistant Professor Zijie Qu have obtained financial support from Shanghai Rising-Star Program (Sailing Project), after their research projects entitled “Research on microstructure regulation of iron oxide and its structure-property relationship in methane catalytic combustion” and “Experimental study on microbial movement under interface constraint” were approved by the Science and Technology Commission of Shanghai Municipality (STCSM), according to an announcement released by STCSM recently.

Catalysis is the basis of the manufacturing industry as 90% of the manufactured products today involve at least one catalytic process in their manufacturing processing. Catalytic science for the efficient utilization of small carbon energy molecules plays a significant role in both environment and economics. Combined with experiment and data simulation, Professor He’s research team focuses on the development of new catalytic technology, data-driven catalyst design criteria and catalytic mechanism research, so as to achieve energy conservation, emission reduction and resource reuse. 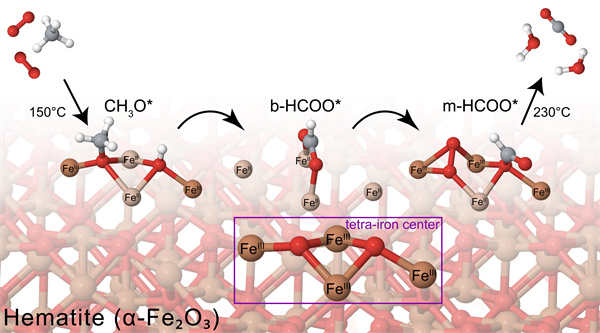 The above figure shows that iron dioxide has an antiferromagnetically coupled diiron center (in purple box) similar to soluble methane monooxygenase, and can activate methane and complete combustion reaction at mild temperature.

Natural gas (mainly methane) is the cleanest fossil fuel. Catalytic combustion of natural gas (CMC) is one of the model implementation of natural gas effective utilization. It is a new combustion technology with low-carbon, high-efficiency and near-zero pollution. The introduction of catalyst can realize the combustion reaction at mild temperature outside the combustion limit, making the combustion process more complete and stable. This technology has great environmental and economic benefits in heating, power generation, chemical industry and other industries. However, the high structural symmetry and low polarity of methane make its activation very difficult under mild conditions. At present, the catalysts that can activate methane below 500 degrees are mostly precious metal palladium-based systems, which are expensive and thermally unstable. Inspired by the fact that methane monooxygenase can activate methane at room temperature, Professor He found that iron oxide has a similar antiferromagnetically coupled diiron spin structure, which can activate methane under mild conditions. The ignition temperature (T50) is as low as 360 degrees, and the activity remains unchanged for several hours. The government-supported project will further study the structure-activity relationship of iron-oxide-based catalysts in CMC, further optimizing the performance and design of iron-based catalyst in CMC reaction through systematic study, so that it has the potential to become an economic substitute for precious metal palladium-based catalyst, which has great scientific research significance and economic value.

Understanding the physical mechanism of the movement of microorganisms in their living environment is of great significance for an in-depth understanding of various biological processes, such as cell division and microbial enrichment. Although the living environment of microorganisms is mostly complex fluids, they are also largely limited by the relevant physical boundaries. Previous studies have shown that microbes such as bacteria and algae all change their movement patterns near physical surfaces due to hydrodynamic interactions. However, existing studies on the effects of physical boundaries on microbial activity are still insufficient. The government-supported project of Professor Qu intends to start from this scientific research pain point and plans to explore the influence of different physical surfaces on microbial movement patterns experimentally. Three-dimensional real-time tracking microscopy  is used to track and observe the motion characteristics of individual microorganisms near physical surfaces for a long time. The three-dimensional trajectory of its motion is reconstructed, and kinematic and biological characteristics such as velocity are measured. And the specific impact of different physical surfaces (glass slides and agar) on the movement of individual microorganisms is analyzed to explore the mechanism of hydrodynamic interactions between microorganisms and solid surfaces during swimming.

According to a guideline released by the Shanghai municipal government last year, Shanghai will establish a pilot program to bring together local universities and scientific basic research institutes to accelerate the city’s development into a world-class science and technology center. STCSM Deputy Director Zhu Qigao was quoted by China Daily as saying universities and research institutes included in the program will be provided with funding from the government every five years and be given full autonomy to choose research topics, conduct scientific research, and use the funds. 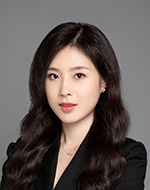 Dr. Yulian He received a bachelor’s degree in chemistry from the School of Chemistry of Nankai University in 2016 and a doctor’s degree in chemistry and environmental engineering from Yale University in 2020. From 2020 to 2021, she engaged in post-doctoral research in the School of Chemical Engineering of Stanford University in the United States. In July 2021, she joined the UM-SJTU Joint Institute as a tenure-track Assistant Professor, and was dual-appointed in the School of Chemistry and Chemical Engineering of Shanghai Jiao Tong University. Her main research interests include catalytic combustion, methane oxidation, carbon dioxide capture and utilization, creation of low dimensional nanocatalysts, structure-activity relationship, first principle calculation and data-driven rational design of catalysts. 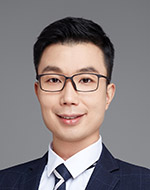 Dr. Zijie Qu is an Assistant Professor and doctoral supervisor at UM-SJTU Joint Institute. He graduated from Shanghai Jiao Tong University in 2013 with a bachelor’s degree, and obtained a master’s degree in mechanical engineering from Purdue University in 2014. Then, he received his Ph.D. and a master’s degree in applied mathematics from Brown University in 2018, and worked as a postdoctoral researcher at Caltech from 2018 to 2021. In July 2021, he joined the JI. He has published many papers on fluid mechanics, fluid experimental technology, bio fluids, non-Newtonian fluid mechanics, active matter and soft matter systems.