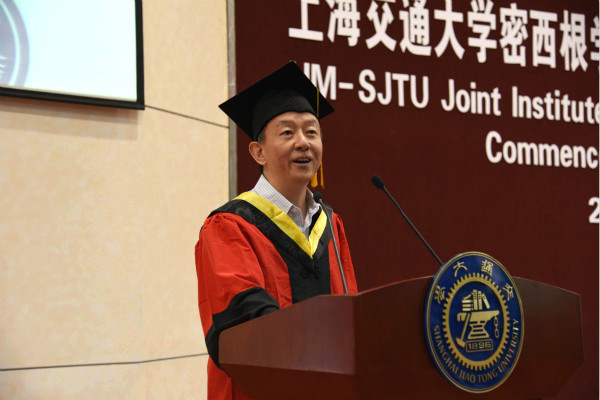 It’s my great honor to be here today, speaking at the commencement ceremony at this marvelous joint institute of SJTU and UM. The first time when I met Dr. Huang and heard about the joint institute, I told him I might be the very first student went through the 2+2 program, just like many of you just did. In 1987, I transferred, after the sophomore year, from SJTU to UM.

And then I graduated from the UM in 1989. But somehow I missed the commencement ceremony that time, so I am very glad this gives me another chance to be this cute attire…

I was born in this city, and grew up through the midst of The Cultural Revolution in China. During that crazy time, young people from China’s cities were shipped the countryside and remote areas, in army trucks, for so-called “re-education by the poor and lower middle peasants”. Because my grandfather was classified as a capitalist enemy, my fate of being shipped to countryside seemed to be all sealed.

When I turned 10 years old, one puzzling question lingered at the back of my mind. I noticed, from my school textbooks/ the movies or the novels, that all the heroes or the so called “good guys”, are all invariably poor and living a life in destitute. On the other hand, all the characters having nice cars and living in decent houses, all the bankers/capitalists, are all “bad guys”. Those were the typical educational material we were exposed to. As a young boy, I was deeply torn and puzzled. I wanted to be a “good guy”, but deeply in my heart, I also yearn for the good material life symbolized by the automobile and the nice house. How can I achieve both? I pondered and couldn’t reconcile the conflict. And I really couldn’t counsel anyone – neither the teachers nor my parents. Because I was sensitive enough to know that asking such questions would bring me shame, criticism or even bigger trouble.

Then sometime later, I watched a movie named “The Man Dealing with the Devils”. (It is a movie you can still find on Baidu.) The hero of the movie was an undercover communist party member, but his public profile was a wealthy business owner. An ingenious solution dawned on me.

Another couple of weeks later, one of my teachers surveyed us – what do you want to be when you grow up? Some of my classmate replied “a factory worker”, some said “a peasant”, and some said “a scientist”, among all the usual answers. When I was asked, guess what I replied, “I want to be the Man Dealing the Devils”.

That was a time you were supposed to be assigned a working post by the state, then stay on for the rest of your life. But I was seeking to challenge the pre-set destiny, at least in my young mind.

Very fortunately, when I reached college age, China reformed and opened up. I was able to enter SJTU by passing the College Entrance Exams, and then leaving for America to attend UM. By the time I graduated with a degree in Computer Science, my parents hoped I would find a stable and well paid job, with one of the biggest International firms, such as IBM, and live a comfortable life as the Man Dealing with the American Devils, just without the under-covering part.

Such I did. I went to a great place called the Silicon Valley and joined a great company – not quite IBM but close – its name was Oracle.

After working for a few years in Oracle, I overheard that one of my young coworkers, who was a rising star in the company, suddenly quit the post. He went to join a “startup”, his own new company. I asked the knowledgeable people, “Don’t you need a lot of capital to start a new company? Is this guy from a rich family?” I was told, even if you have no money, you can still start a company, as long as you have a great idea and you can convince a venture investor to support you. This is how I first learned the “startup” concept. And I was very intrigued.

Although I had a well-paid job with a nice company, I could see what my life was going to be like 30 years down the road.  I don’t about you, for me, once I could see the end point of a path, the journey suddenly became boring and insipid. The “startup” idea grasped me. This route seems to be, in relative terms, the surest way to make a fortune with little more than bare hands. Remember – the real lure of being a Man Dealing with Devils, is the man’s open profile of being a rich business owner. I want to be a business owner.

I decided to quit Oracle and try out the startup scene. And I landed with a famous Internet startup called Yahoo!, and this move unleashed a series of successes associated with the Internet, with many more startups and eventually with venture capitals.

In a normal person’s psyche, risk and uncertainty are to be avoided at all cost. I knew if I chose the startup route, there would be a lot of risk and uncertainty involved. But risk always goes hand in hand with reward, and there can be no progress without uncertainty. Our society needs a fair amount of risk taking in order for it to develop. It worries me when I see the best of breed young people all flocking to seek a few stably paid government job posts.

Life should be an adventure. It is the very uncertainty that makes life interesting.  This is the first mantra I hope you can take away from my talk today.

Embrace uncertainty, and remember risk can be your friend. Of course, better yet, you should preserve the upside uncertainty while limiting the downside uncertainty. But that’s a whole new topic which I have no time to cover now.

My second advice to you is the importance of keep learning throughout your working life and beyond.

Since I was young in school, I formed a habit of reading the textbooks before going to the class. Trying to figure out the course material beforehand is a rewarding activity ( It’s rewarding perhaps because I could show off during the class my comprehension ability… ). But This self-study ability became tremendously helpful during my working life.

When I was working at Oracle’s server technology group, I was lucky to have the opportunity to work side by side with some of legendary programmers such as Andy Mendelson, who wrote the kernel of Oracle Database, and Mark Kremer, who was my mentor in search and retrieval technology. I found it joyful to learn by simply reading their source code, often in order to debug their errors.

Nowadays, when I fill a form which asks my occupation, I still put in computer engineer rather businessman or investor. I am proud of my technical achievements. Bill Gates once remarked, “Science is deep, and business is relatively shallow.” He means science and technology often requires more mental agility than business and commerce. Over the last few decades, computer science has been in such rapid advancement, knowledge turned stale in astonishing speed. To keep up with such pace, an engineer must constantly learn new toolkits and new programming languages. The capability to quickly and effectively pick up new knowledge and skills becomes essential. I found the best way to learn is simply by reading, by talking to experts and by doing a piece of work.

In 2008, I left Alibaba Group and became a professional investor. It’s my epistemic curiosity that drove me to this transition, because in order to be a good investor, you have to pick up basic knowledge in a formerly unfamiliar business field within a matter days or weeks. By becoming a investor, I can have the opportunity to learn many different aspects of society and human life.

I hope you will always find learning new things a joyful experience. And keep learning and exploring till your last breath.

A third advice I hope you can take away is simply – try to be lucky.

Some media reports characterized my career track as being exceptionally lucky – being at the right place during the right time, and meeting the right people.  I totally agree that I was very lucky!   I believe luck is so important in one’s career or in any processes; and luck’s role can never be overstated. But is there any way we can influence our luck?

Believe or not, we can do something. Have you ever heard of the “attraction principle”? Based on the latest research in positive psychology, if you repeatedly imagine a positive scenario, as your mind doesn’t know the difference between the imagination and reality, then you subconscious energy will strive to make the imagination a reality. This process can influence the reality. The method derived from this theory has already been applied in athletic training. Track athletes were told to meditate and imagining the moment they were leading the pack in the race, or being on the model podium.

So optimism is not only an attitude in life, it is also a skill in life.

I have a casual friend, whom I used to know when I was living in the Silicon Valley. I ran into him at a gathering very recently. He said to me, you made a brilliant decision by returning to China 15 years ago. And see how well you are doing! How did you come to such decision at the time?  I said I had to thank Jack Ma for that. I was intrigued by his vision and determined to join Alibaba. Then he said, “You know what, Jack Ma once came to the US and held a speech at a lecture hall in Stanford, I also went to listen. But then my gut reaction was that – there are many crooks coming out of China these days. Here comes another one.”  I couldn’t help laughing out, and commented, “You know our difference – I am more a optimist so I am more easily crooked.”

Cynicism can be an obstacle to your success. Believe in the goodness in people, and believe in the future. If you are optimistic and take the action, a vision becomes reality. But if we just talk and don’t take action, we could all turn out to be crooks.

Optimism can bring you good luck. Hope I made the point which you want to remember…

It has been two and a half decades since I was a student like you in this campus. I am so glad to be able to reflect and share my story with you. I envy your youth and your energy, and I envy the endless possibilities that is about to unfold in your life.

Remember, you can embrace risk and uncertainty!

Remember to keep learning and exploring!

Above all, remember optimism can bring luck to you all!

Thank you all very much! 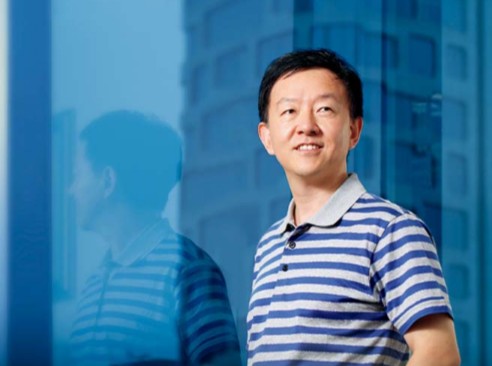 Founder & Chairman of H&F Fund Management Group
Visiting professor at Singapore National University
Member of the JI Advancement Advisory Board
Past experiences
•       Investor & CTO of Alibaba Group
•       Developer of patent “Semi-structured search” at Yahoo (USA)
•       Manager of R&D at Oracle
•       Venture capitalist and winner of 2014 Chinese Investors
Started study at SJTU in 1985, transferred to the University of Michigan in 1987, and graduated with a BS in Computer Science.