The research project was supported by Shanghai Sailing Program (Contract No. 18YF1411100) and the National Natural Science Foundation of China (Grant No. 51802193). 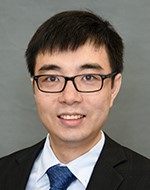 Shouhang Bo is a tenure-track Assistant Professor of the UM-SJTU Joint Institute. He received his B.S. degree in Chemistry from Fudan University in 2009 and Ph.D. degree in Chemistry from Stony Brook University in 2014. Before he joined JI in July 2017, Professor Bo was a postdoctoral fellow at Department of Materials Science and Engineering, Massachusetts Institute of Technology, and Materials Sciences Division, Lawrence Berkeley National Laboratory. His recent research interests include solid-state electrolytes, interface and imaging of solid-state batteries.