The Michigan-Shanghai Jiao Tong University Joint Institute (UM-SJTU JI, JI hereafter) 2020 Winter Design Expo opened on December 9 at Long Bin Building, displaying 36 innovative design projects from a number of autumn experimental courses of freshmen and senior students including “Introduction to Engineering” and “System Design and Implementation”. Online live broadcasting was set up for the first time in which two JI broadcasters introduced the exhibition and showed the students’ design works in the building.

Two JI broadcasters introduce the design expo in front of the event poster.

Sharp decrease of interpersonal contact under the global COVID-19 pandemic triggers rapid development of the industrial unmanned equipments. Creative design projects were displayed on site by JI students focusing on the unmanned intelligent technologies in response to such market trend. 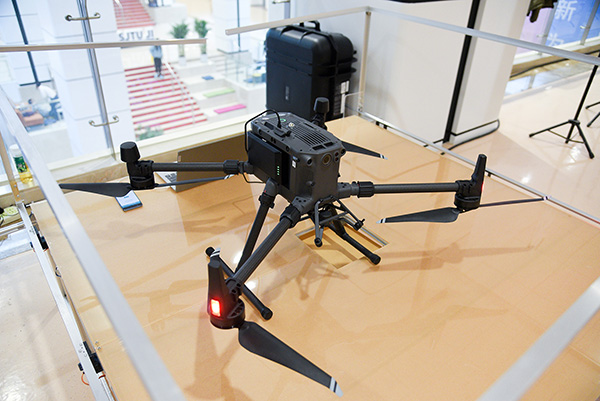 The era of e-commerce generates a huge courier service industry. In 2019 alone, Chinese courier firms handled a total of 63 billion parcels, or 45 per capita. Drone delivery is a solution for the huge courier challenge. Using drones to deliver small parcels to customers saves human labor and improves efficiency. The Automatic Parcel Delivery Drone Base Station project team of senior students developed a portable, low-cost drone delivery system that can be mounted on delivery trucks,  in which drone can automatically take off from and land on the docking station, and execute simple delivery tasks, all with one tap on an android app. 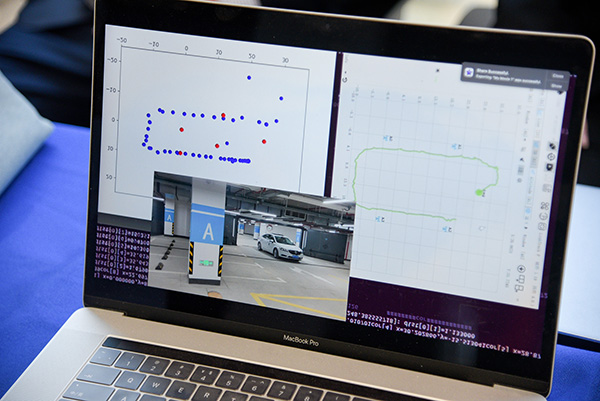 Finding a car in a large parking lot is often a problem for many people. The Indoor Localization Using UWB Signal project team proposes to use UWB sensors assembled on vehicle and in environment to localize host vehicle in an indoor area. The system acquires distance data provided by UWB sensors. Raw data is transmitted to the on-board computer and processed in Robot Operating System (ROS). Using a 3-point localization algorithm, distance information can be transformed into positional information of the vehicle. The indoor localization system based on UWB sensors makes up for the deficiency of GPS signal loss and has the advantage of high accuracy as well as stability, low cost, long life span and handy size. 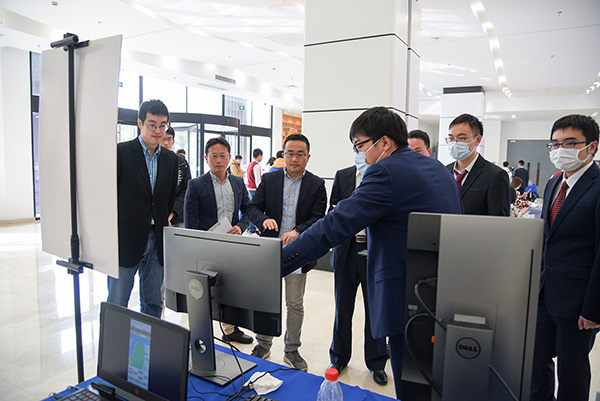 With the continuous development of unmanned ariel vehicle technology, unmanned drones are now widely used in filming, agriculture irrigating and delivery services. However, there are still two main drawbacks for the drones. First, the drones are controlled by the point-to-point RF signal from the remote controller, and the effective transmission distance is usually within 5 km. As a result, users cannot control the drones distantly, not to mention controlling the drone with a cellphone independent of a remote controller. Second, it is difficult to supervise a drone’s behavior. To overcome the two drawbacks, the 5G Networked Drone project team designed a communication system based on mobile network, and carried out real tests on a DJI M600 Pro drone. With such a system, users can get rid of the remote controllers and directly use cellphones to control the drones through mobile network. Meanwhile, users can also achieve supervision on the drone. 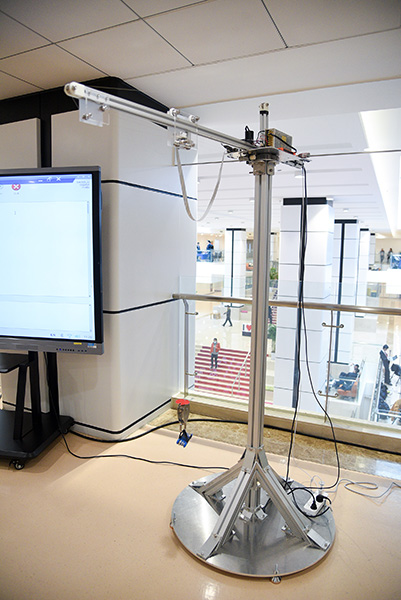 The growth of construction industry creates an increasing demand for tower cranes. Meanwhile, operating-error-induced tower crane accidents cannot be ignored on a global scale. Developing unmanned and remote-controlled tower cranes is the key to the situation. In this process, stabilizing the crane hook is a key question. The Prototype of Tower Crane Remote Control project develops a control system to stabilize the crane hook. A simulation design test showed the system can dampen the oscillation to less than 3 degrees within 20 seconds.  The project is set to offer a new strategy of auto-stabilization for unmanned tower cranes.

Unmanned intelligent technologies have not only reshaped traditional industries, but also changed the ways of human life.  The JI design expo projects serve to encourage students to find problems from life and work out creative solutions by using what they have learnt from classes.

Flowers and plants bring vigor and vitality to human life. However, flowers are easier loved than grown. For example, watering flowers at home often require a lot of efforts, time and cost. It can be a pain especially for busy-working people who need to run business errands from time to time. The Automatic Plant-watering Vehicle project team comes up with a solution, an unmanned car that is capable of watering flowers. Three infrared sensors are placed in the front of the car to recognize the lines labeled on the floor, which give information to the car whether to water, to go forward, or to stop. To improve the performance and compatibility in different circumstances of the vehicle, the team adds a servo to adjust the watering angle according to different height of the plants. To validify this function, the team also adds more information to the set lines on the floor. The different position of the line conveys the information about the height of the plants to the vehicle via 2 infrared sensors on both sides.

In recent years, more and more factories in economically developed regions are plagued by fire accidents. Once a fire breaks out, many factories find it difficult to put out the fire because of the complex land conditions around them, resulting in heavy casualty and property losses. Statistics showed 2926 fire accidents broke out in worldwide factories in 2019, equalling a year-on-year increase of 5.8 percent. In response to such a social problem, the Little Fire Fighter project team works out an autonomous car that can detect and extinguish the fire. The little fire fighter adopts the design of four systems: tracking system, detecting system, extinguishing system and alarming system. The tracking system uses two infrared sensors to make sure the car runs on the black line under the white background, which can solve the problem of the road complexity in the factory. The detecting system is made up of two flame sensors, which can detect the fire with the wavelength at the range of 700 to 1100nm. Within the extinguishing system, the wrench of the fire extinguisher is linked to the servo by a stick. The stick can enlarge the force of the servo by the lever principle so that the wrench is applied enough pressure to open the nozzle. Once the nozzle is opened, the fire extinguisher will spray out some extinguishing matters to put out the flame. Meanwhile, the buzzer in the alarming system will run to make some sounds to warn the workers in the factory.

Ping-pong has been a globally popular sport for a long time. In spite of the simplicity, fun and excitement of the game, picking up the fallen balls is always a time-consuming bother to not only professional players but also amateurs.  The Ping-pong Ball Collector Robot project team develops a robotic car consisting of Pixy2, Arduino Mega, a roller and container, 3 motors and infrared sensors. The camera learns the size and color of the ping-pong ball in advance, using pixel color block recognition. The Pixy2 can automatically identify the ping-pong balls. When there is no ball in range, it turns around to look for balls. The car will go towards the ball and collect it. And it can identify its own “home”, move towards it and release balls. The infrared sensors are responsible for avoiding obstacles. The robotic device can also be applied in other sports such as golf and tennis. 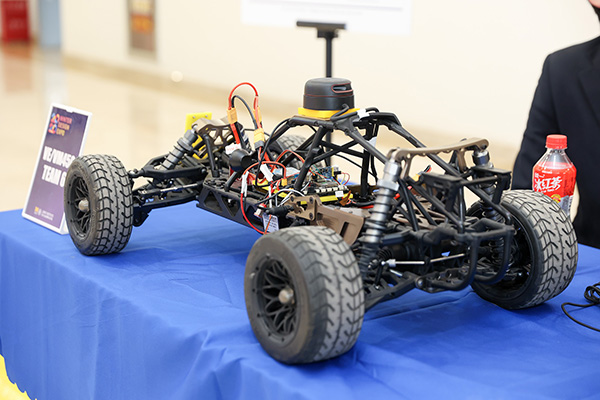 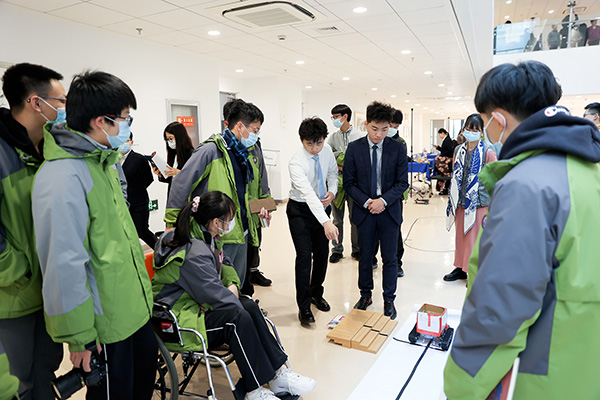 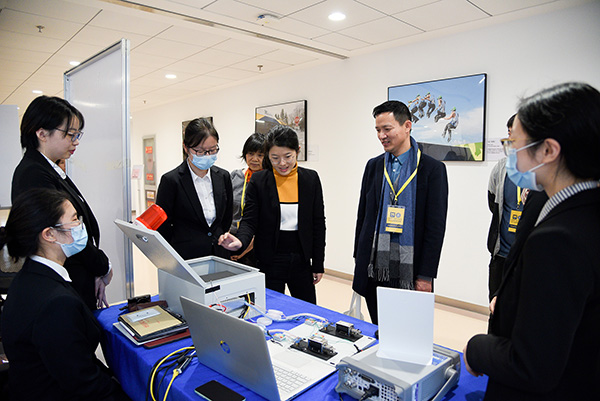 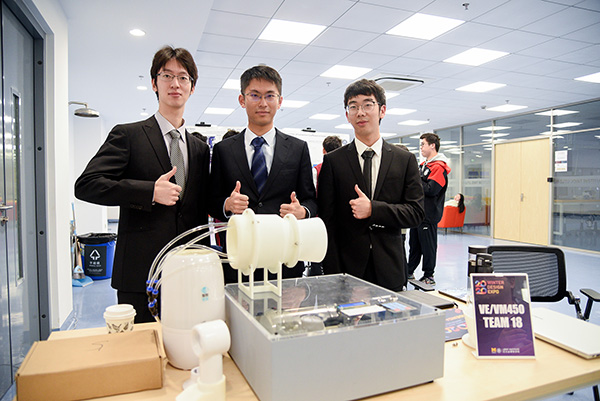 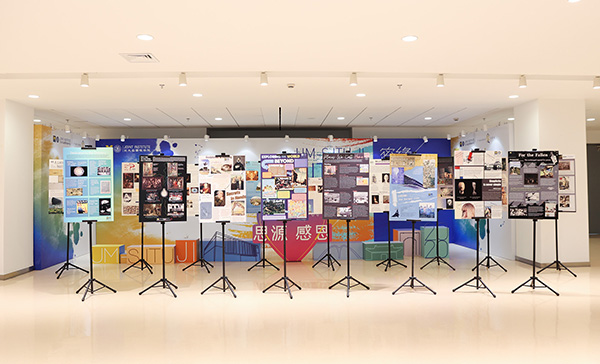 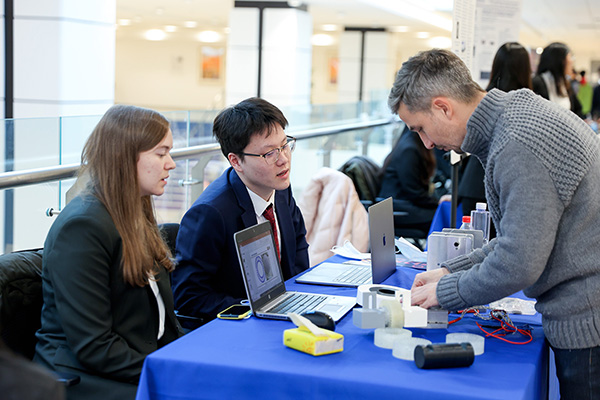 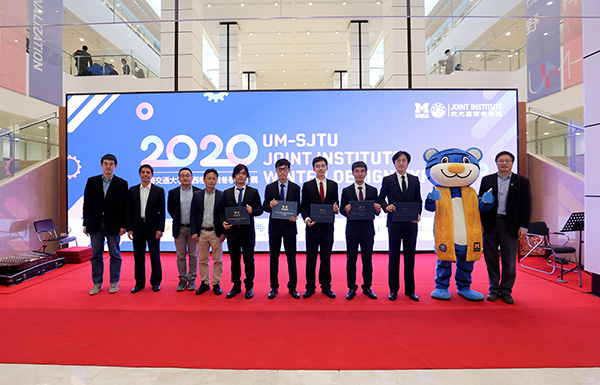 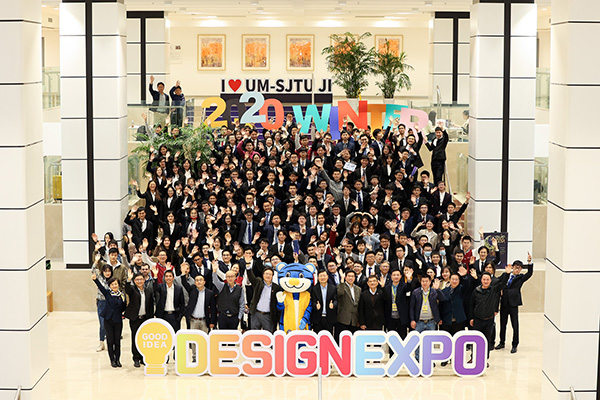 Since the inception of corporate-sponsored projects at JI in 2010, more and more multinational companies have been wooing the talented JI students to work on their market-oriented projects. The 2020 design expo attracted representatives from companies including General Motors, VMware, Hasco Vision, Builder, Shanghai Feili and  PengyaJS. In meeting with JI faculty and administration, they expressed strong interests to continue collaboration with JI in the areas of capstone design, research cooperation, employment and internships, scholarships and career development guidance. The design expo provides students opportunities of real-life engineering practices and stimulating creative thinking, through various measures such as course introduction and enterprise-institute exchange.  It also provides a comprehensive and multi-channel platform for JI to explore talent cultivation and cooperation with enterprises.