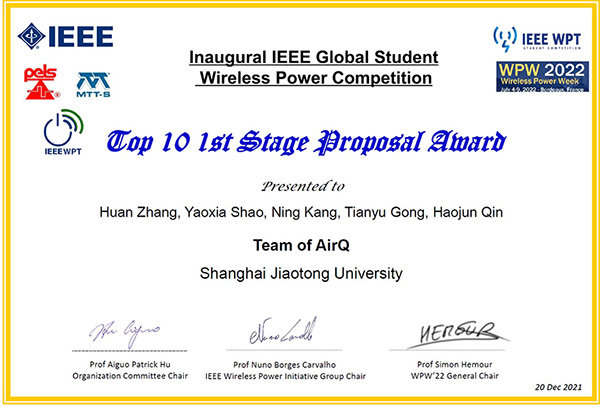 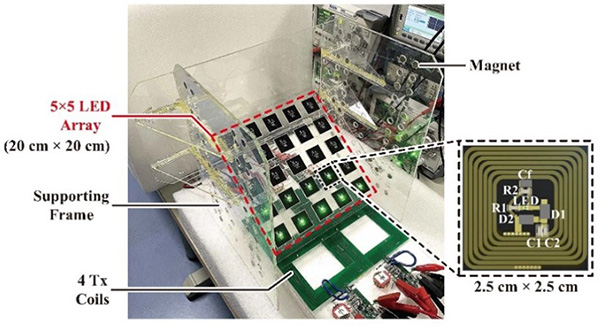 An LED array to visualize the magnetic field shaping

At present, the team has completed the theoretical demonstration of the new wireless power transmission system. By controlling the phases of each sub-transmitting coil in the coil array differently, the magnetic field shaping in three-dimensional space is realized and proposed a solution to minimize the mutual inductance between the sub-coils in the coil array. In terms of preliminary functional verification, the function of 6.78MH high-frequency wireless power transfer for two electronic devices at the same time has been completed, and the theoretical power can reach 15 W, which is the same level as most of the current commercial fast charging products. 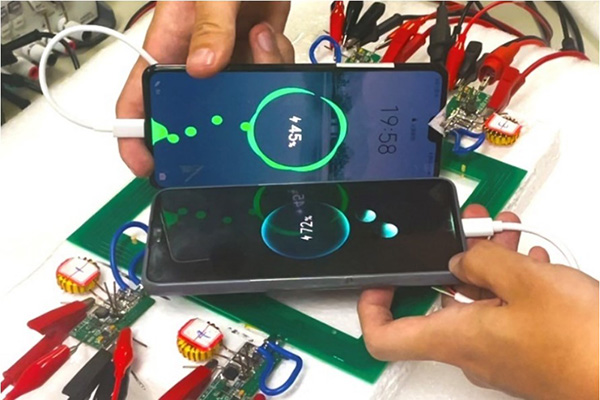 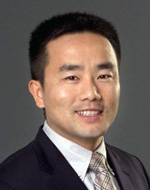 Chengbin Ma is a tenured professor at the University of Michigan-Shanghai Jiaotong University Joint Institute and a senior member of IEEE. He received the B.S. degree in industrial automation from East China University of Science and Technology, Shanghai, China, in 1997, and the M.S. and Ph.D. degrees in electrical engineering from The University of Tokyo, Tokyo, Japan, in 2001 and 2004, respectively.

From 2004 to 2006, he was an R\&D Researcher with the Servo Motor Laboratory, FANUC Limited, Japan. Between 2006 and 2008, he was a Postdoctoral Researcher with the Department of Mechanical and Aeronautical Engineering, University of California, Davis, USA. In 2008, he joined the University of Michigan-Shanghai Jiao Tong University Joint Institute, Shanghai Jiao Tong University, Shanghai, China, where he is currently a Professor of Electrical and Computer Engineering. His research interests include battery and energy management, wireless power transfer, dynamics and motion control, and wide applications in electronic devices, electric vehicles, microgrids, smart grids, etc.

Dr. Ma was the recipient of many teaching and research awards at Shanghai Jiao Tong University, such as Teaching and Education Award in 2020 and Koguan Top Ten Best Teacher Award in 2017. He also received Research Excellence Award from AirFuel Alliance, USA, in 2019. He is an Associated Editor for the IEEE Transactions on Industrial Informatics and IEEE Journal of Emerging and Selected Topics in Industrial Electronics. He served as Delegate of Energy Cluster (2019-20), and is now Chair of Shanghai Chapter, IEEE Industrial Electronics Society. 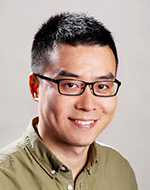 Dr. Liu was the recipient of Top Ten Academic Star Award and Excellent PhD Thesis Award Nomination from Shanghai Jiao Tong University in 2016 and 2018, Research Excellence Award from AirFuel Alliance, USA, in 2019, and Best Paper Award of IEEE ECCE-Asia in 2020. He was a Guest Editor of IEEE Transactions on Industrial Informatics and serves as Chair of the Wireless Power Transfer for Energy Storage Charging Subcommittee of Energy Storage Technical Committee, IEEE Industrial Electronics Society.