In early July, the first graduate research poster contest of the Joint Institute was held at the Yu Liming Student Center. In the competition, JI graduate students presented the results of their research projects to the public in the form of posters. The contest promoted academic exchanges among teachers and students while honing graduate students’ research and presentation skills. 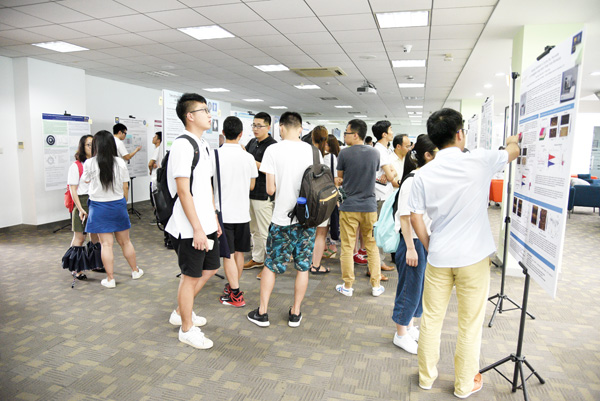 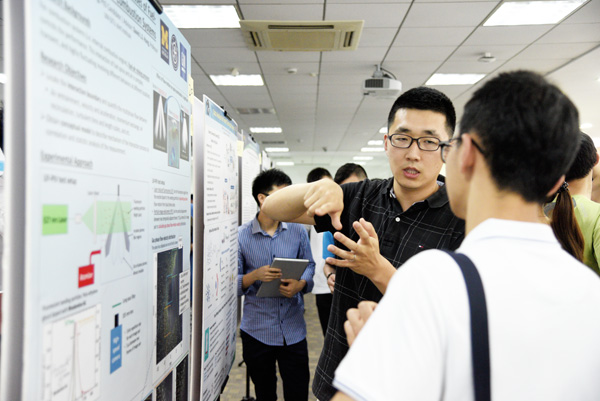 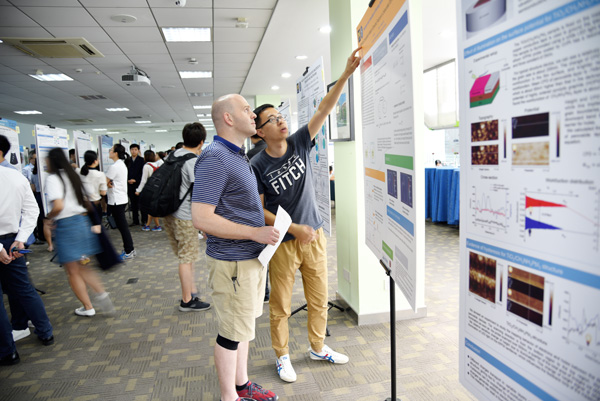 The contest started in May this year, with 41 graduate students participating. Under the guidance of their advisers, students worked hard on the preparation, including selection of the topics, design of the layouts, and rehearsal of the speeches. Professor Shane Johnson remarked, “The poster contest also provides an excellent opportunity for us to understand the research work of other teachers.”

The semifinal and final of the contest were held on July 6. After the first round of exhibition, six doctoral students’ posters stood out. A new round of presentation produced the three finalists. In order to better demonstrate JI graduate students’ achievements in research and to promote in-depth understanding of JI graduate school for prospective students, the activities were specifically arranged during JI’s first summer school for international graduate students and 2017 recruitment summer camp for domestic graduate students. The event was a success and received wide acclaim from international students as well as domestic applicants. 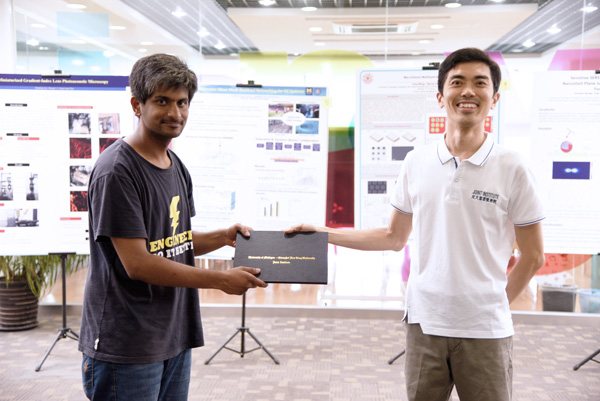 Dr. Guiyuan Zheng handed out the second prize of the poster contest to winner Zeeshan Qaiser 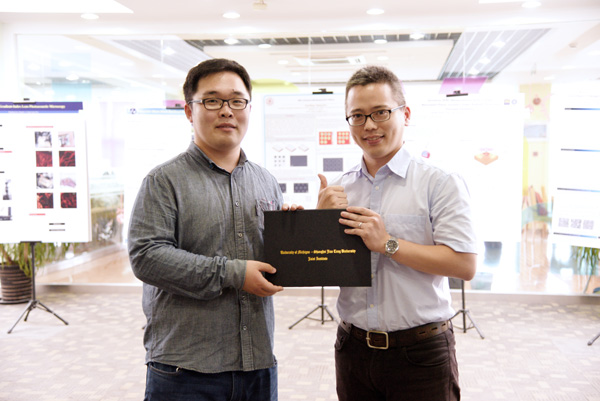 JI teachers and winners of the poster contest

Xiaodan Wang，starting as a master student in 2015, transferring to doctoral program in 2017

“The effect of the plantar plate on plantar aponeurosis strain: 3D finite element modeling of foot and ankle”
Zeeshan Qaiser, starting as a master student in 2014, transferring to doctoral program in 2017

Ang Wang, starting as a master student in 2013, transferring to doctoral program in 2015

I think this poster contest is one of the most meaningful and successful academic activities of the Joint Institute. From the early research to the final completion of a poster, and then the exhibition and presentation to different audiences, it requires not only solid foundation of scientific research but also good communication and presentation skills.

For this poster contest, I first selected a more basic aspect of my research, taking into account that the audience is undergraduate students of the summer camp. Then, in order to show the rich contents on a small poster board, the organization of the contents and page layout is very important. In the process of exhibition and presentation, my experience is to target the summer camp students, starting from the basic phenomena and knowledge to explain some of the principles and experimental results. Finally, it is most important to analyze the application in the real field, because it is often what the amateurs are most concerned about.

On the other hand, in an international conference, because my audience is the world’s top professors in the field, my focus will not be on the introduction of the basic principles. Instead, I focus on my breakthrough, explaining my simulation and experiments in detail. Finally, I point out my the future direction of research and its significance for the existing research. In addition to targeting the audience, in the process of presentation, eye contact, body language, and facial expression all count. Make timely pause and tone change to give

In addition to targeting the audience, in the process of presentation, eye contact, body language, and facial expression all count. Make timely pause and tone change to give the audience time to respond, which also helps keep their attention. In short, whether it is a poster exhibition or an oral report, one needs to be well prepared early as well as perform well on the spot. JI’s numerous public speaking opportunities also provide me with plenty of exercises. With more experience, there is less stage fright.

Xiaodan Wang, a first-year doctoral student at JI (starting as a master student in 2015, transferring to the doctoral program in 2017), has participated in two international conferences. The first conference was the Progress In Electromagnetics Research Symposium (PIERS), held in Shanghai in 2016, where she presented a paper, in the form of a poster, entitled “Sensitive SERS Measurement with a Single Nanoshell-Plane Junction under Radial Polarized Focused Excitation” as the first author, which can be retrieved at EI. The second international conference was Nonlinear Optics (NLO), organized by the American Optical Society (OSA) in Hawaii in 2017, where she made an oral presentation as the first author of a paper entitled “Efficient Four-Wave Mixing in Loaded Nanoscale Plasmonic Hotspots.”